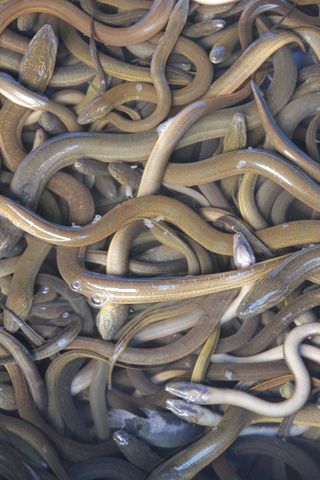 Rare European eels from the Mediterranean to Scandinavia make an epic journey when it's time to mate. They leave rivers and brackish habitats, swimming hundreds of miles across the Atlantic to the Sargasso Sea, an open ocean region that is warmer, saltier, bluer and clearer than the surrounding waters.

This trek had remained a mystery to science since no eggs nor adult eels had ever been caught in the Sargasso Sea. But researchers recently attached satellite tags to about 600 eels from different places in Europe and were finally able to map the route of the spawning fish.

"We could track the satellite tags as far away as the Azores. This suggests that the eels take a different route to the Sargasso Sea than previously thought. It seems as if they're saving energy by hitching a ride on the Azores Current," researcher Kim Aarestrup, of the Technical University of Denmark (DTU), told youris.com.

The EU-funded eel-tracking project called eeliad, which is about to reach its end, also revealed through genetic data that the species (Anguilla anguilla) is panmictic, meaning individuals randomly mate with others. And this suggests the eels flock to one spawning area instead of many.

"This is very unusual for animals that are so widely distributed. It strongly indicates that the European eels are spawning in the Sargasso Sea and no other places," another DTU researcher, Thomas Damm Als, told the nonprofit media agency.

The population of European eels is now less than 5 percent of what it was 40 years ago, according to youris.com, and the species is listed as critically endangered by the International Union for Conservation of Nature (IUCN).