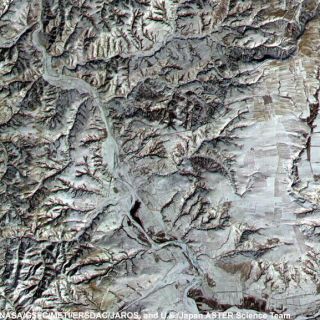 This ASTER sub-image covers a 12 x 12 km area in northern Shanxi Province, China, and was acquired January 9, 2001. The low sun angle, and light snow cover highlight a section of the Great Wall, visible as a black line running diagonally through the image from lower left to upper right. The Great Wall is over 2000 years old and was built over a period of 1000 years. Stretching 4500 miles from Korea to the Gobi Desert it was first built to protect China from marauders from the north.
(Image: © NASA/GSFC/METI/ERSDAC/JAROS, and U.S./Japan ASTER Science Team)

An unusually cold winter across China has some regions hitting their lowest average temperatures in more than 40 years, according to state media reports. The Chinese national meteorological agency said polar fronts caused by global warming are to blame for the frigid air.

The freeze is the coldest winter in 28 years, the English-language newspaper China Daily reported. The national average temperature across China's vast territory was a chilly 25.2 degrees Fahrenheit (minus 3.8 degrees Celsius) since late November. In northeast China, which typically has snowy, cold winters, the average temperature was an icy 4.5 degrees Fahrenheit (minus 15.3 degrees Celsius), the lowest in 42 years.

The loss of Arctic ice could affect weather in China in several ways, said Julienne Stroeve, a research scientist specializing in Arctic ice at the National Snow and Ice Data Center (NSIDC) in Boulder, Colo. "It's hard to separate out cause and effect, but one of the things we do know is when we have less sea ice, the Arctic atmosphere is a lot warmer," Stroeve told OurAmazingPlanet.

With less ice cover, the Arctic Ocean absorbs heat and solar energy from the sun that the ice would have reflected back into space. The heating of Arctic sea water can shift weather patterns in the Arctic and also affect the jet stream, Stroeve said. The jet stream is a persistent river of air that circles the planet, and has a strong influence on winter storms and movement of frosty polar air. Dips and troughs created by the shifting Arctic wind patterns could let Arctic air sneak south, studies show.

November and December also saw a strongly negative Arctic Oscillation, a winter weather pattern that drives colder-than-normal weather, Stroeve said. The NSIDC reported today (Jan. 8) that the Arctic Oscillation is weakening, so relief may be coming to hard-hit areas. "Temperatures aren't quite as cool now as they have been," Stroeve said.

As of last week, about a thousand ships were stuck in ice in Laizhou Bay in the eastern Bohai Sea, according to China Daily. Some 10,500 square miles (27,000 square kilometers) of sea surface has frozen in Bohai Bay, the greatest ice extent since records began in 2008, according to the Chinese Meteorological Association.

Northern India is also suffering from record cold winter temperatures, Weather Underground reported. In Uttar Pradesh, home to New Delhi, 175 people have died from the cold. The high on Jan. 2 was just 49.6 F (9.8 C), the coldest daily maximum in 44 years.

Brutal cold is also shattering records across Russia. This winter is the coldest on record since 1938, and temperatures plunged as low as minus 58 F (minus 50 C) in some areas.