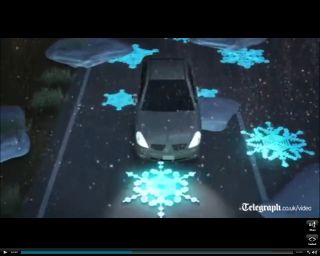 The Dutch "smart highway" will have features like glowing ice crystals to warn drivers of icy conditions.
(Image: © Screengrab from Telegraph.co.uk)

From the country that gave the world wooden shoes comes a much slicker way to travel: A Dutch design firm is creating a "smart highway" that glows in the dark, charges electric vehicles and displays weather and road conditions on its illuminated surface.

As eco-friendly as it is innovative, the first stretch of this experimental highway will be built in mid-2013 in the Netherlands. Daan Roosegaarde, founder of design lab Studio Roosegaarde, expects the road to be "the Route 66 of the future," according to Popular Science.

The highway will feature lane dividers made from photoluminescent paint that recharges during daylight, then glows throughout the night. And temperature-sensitive paints on the roadway will display ice crystals in below-freezing weather to warn drivers of possible icy conditions, according to Wired.

Some of the designers' other ideas remain in the conceptual stage, however, and will be implemented over the next five years as more "smart highways" are constructed, according to Wired.

In one example of the roadway's innovations, the designers will save energy by creating lights that shine only when cars are on the road and switch off when there's no traffic, according to the Telegraph. Other electricity-saving ideas include roadside "pinwheel lights" that are powered by the wind created when a fast-moving car drives past them.

Perhaps the most futuristic concept devised by Studio Roosegaarde is the "induction priority lane," reserved exclusively for the use of electric cars. Magnetic fields under the road's surface would charge an electric car "the same as charging your electric toothbrush," EminaSendijarevic of Studio Roosegaarde told Popular Science.

The road design, which has attracted inquiries from India, the United Kingdom and other countries, was born partly out of frustration with the slow pace of infrastructure improvements.

"Research on smart transportation systems and smart roads has existed for over 30 years," Sendijarevic told Wired, and designers "are not going to wait any longer for innovations to find their way through the political system, but will start building this highway now."