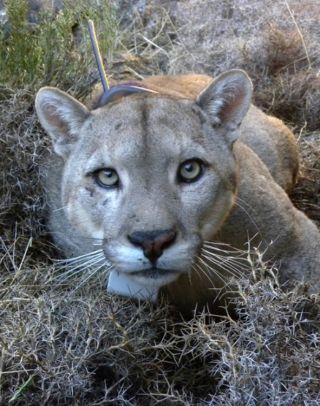 Portrait of an adult male puma, with a GPS collar.
(Image: © Mark Elbroch)

Cougar biologist Mark Elbroch spent more than a year in South America's Patagonia region tracking down pumas and recording what they hunt and eat, riding on a horse for up to 21 hours at a time. In the course of his research, Elbroch noticed something odd: Patagonian pumas kill about 50 percent more animals than their North American counterparts and spend less time feeding on their hard-earned meals. But why?

According to a study Elbroch co-authored and which was published earlier this month in the journal PLoS One, the cougars abandon their kills due to harassment from Andean condors, a near-threatened scavenging bird, Elbroch told OurAmazingPlanet. This came as a surprise, however, since the condors are physically much smaller than these mountain lions, and don't directly threaten the big cats, he said.

Skittish in the grasslands

Elbroch said this unique behavior primarily occurs in the open grasslands, where the animal's favorite prey — the guanaco, a large animal in the camel family — are most plentiful. When Patagonian pumas make a kill in the forest, however, they've been known to stay with it for up to a week, gorging themselves and only leaving after they're full (they typically get full before the meat runs out). Condors cannot land in the forest, however, since they travel awkwardly on land and can't negotiate wooded areas.

To make up for the relatively brief amount of time spent with kills in the grassland, the big cats must kill more prey to get the same amount of meat, said Elbroch, who works for Panthera, a conservation group dedicated to preserving big cats.

North American cougars (also known as pumas, mountain lions, panthers and catamounts) usually only leave their kills when chased away by larger animals like bears or wolves, Elbroch said. Although condors don't chase the cats away, apparently their presence is irritating enough to drive away the cats. Condors rarely land alone, arriving with a coterie of sharp-beaked kin.

Elbroch said the cats' skittishness may also owe something to the presence of humans, primarily sheep herders, in the Patagonian grasslands. Humans have extensively hunted mountain lions in the past. But cougars have rebounded slightly in the past decade or so as demand for wool, and hence sheep, has declined, Elbroch said.

A lot of meat

"I believe this is the first study to quantify how much meat is lost, and how much extra hunting pumas are forced to do — at considerable risk — to feed these 'kleptoparasites,'" said Paul Beier, a researcher at Northern Arizona University, referring to the many animals that make a meal of the cougar's table scraps. Beier wasn't involved in Elbroch's research. Up to 17 different animals depend upon cougar kills for food, Elbroch said.

"They are providing a lot of meat to their community — they are truly a keystone species," Elbroch said, referring to a species that provides multiple irreplaceable services that keep an ecosystem productive.

Elbroch spent more than 1.5 years in Patagonia, conducting most of his work in the Chacabuco Valley, in southern Chile near the border with Argentina. There is only one road in the area, meaning much of his work had to be done on horseback and on foot. Luckily, Patagonia offers some of the most breathtaking landscapes in the world. [Image gallery: Patagonia Expedition in Pictures]

His group tracked cougars using dogs, often chasing the cougars for up to five hours. Then they'd dart the cougars, before attaching a collar with a GPS tracking device and letting them go free. Information gathered from the collars allowed Elbroch to know where the cougar had traveled and spent the night, after which he'd see if he could find what the cougar had been eating. His group recorded 266 different carcasses, the large majority of which were guanacos.