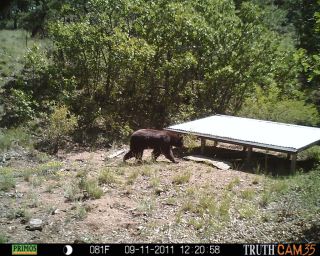 A black bear roams in the range of a BLM "critter cam" set by the Royal Gorge Field Office in Colorado.
(Image: © Bureau of Land Management Colorado)

Bears and speeding cars don't mix too well, and collisions can be deadly for man and beast. To avoid traffic accidents and put less pressure on black bears, the state of Georgia has completed initial plans to build six tunnels underneath a highway in the center of the state to allow the animals to safely cross, the Associated Press reports.

The state is currently purchasing land adjacent to State Route 96 to enable the construction of the tunnels, said Jeremy Busby, a project manager for the Georgia Department of Transportation, the AP reported.

The tunnels are similar in design to those used to help the endangered Florida panther negotiate roadways in that state, Busby said. The passageways should help protect bears that live in Georgia's Ocmulgee and Oaky Woods wildlife management areas, one of the three areas where black bears are found in the state. The animals can also be found in the North Georgia mountains and the Okefenokee Swamp near the Florida-Georgia border.

"We're planning to install some fencing to funnel the wildlife into these crossings," Busby told the AP. "So the bears will kind of be funneled underneath the road through these crossings." The tunnels will be placed where bears usually cross the road, often when streams and rivers meet the road, he said.

The tunnels are part of an estimated $60 million refurbishment of the highway, which primarily involves widening the road. The timing of the bear tunnel project is uncertain, as funding hasn't yet been secured, the AP reported.