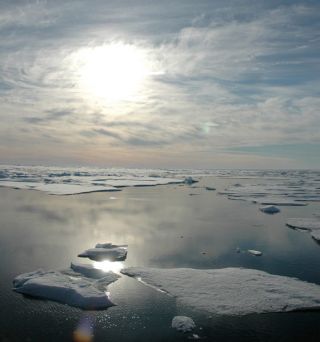 The dramatic loss of Arctic sea ice this summer is just one of the signs global warming has not stopped, scientists say.
(Image: © Jeremy Potter NOAA/OAR/OER)

Delaying global action on climate change by 20 more years will put the goal of keeping the world relatively cool out of reach forever, no matter how much money humanity later spends to try to solve the problem, a new study finds.

Since the 1990s, scientists and international negotiators have aimed to keep global temperatures from warming more than 2 degrees Celsius (3.6 degrees Fahrenheit), but little progress has been made so far in concrete steps toward that goal. The most recent climate talks, in Qatar in December, ended with only modest steps that fail to address growing greenhouse gas emissions, climate scientists said.

It's these delays that ultimately make dealing with climate change more expensive and perhaps eventually impossible, according to a study published this week (Jan. 4) in the journal Nature. While it's true there are still uncertainties about how the climate will respond to specific strategies, these uncertainties are nothing compared with potential disaster caused by delay, said study researcher Joeri Rogelj of Switzerland's Institute for Atmospheric and Climate Science in Zurich.

"The uncertainties about how the climate system will respond have been previously used as an argument to postpone action until we have learned more," Rogelj told LiveScience. "We show that such a delay strategy is unsupported and that the most important factor for staying below 2 degrees C is the timing of when we start tackling this problem at a global scale."

Many researchers have attempted to weigh the costs and benefits of climate-change strategies ranging from a carbon tax on emissions to requirements for sequestering carbon underground rather than releasing it into the atmosphere. What Rogelj and his colleagues did differently was to rank the importance of "the known unknowns." These are the uncertainties that keep scientists from predicting exactly how the future of climate will unravel. They include geophysical uncertainties — how the climate system of our planet will respond to specific strategies — as well as social uncertainties, such as future growth and energy demand. Technological uncertainties include what innovations will be available for lowering emissions. And finally, there are the political uncertainties: When will the world decide to act to prevent further warming? [8 Ways Global Warming Is Already Changing the World]

For the first time, Rogelj and his colleagues quantified and ranked the importance of each of these uncertainties. They found that politics dominated.

In other words, the timing of climate-change action plays a more important role in keeping the planet from possibly catastrophic warming than social, geophysical or technological hurdles. If humanity delays in taking action, even the best-case social, geophysical and tech scenarios will do little good.

"When delaying action by two more decades, chances to stay below 2 degrees C become very low and we find that they cannot be improved later on, no matter how much money we throw at the problem in the future," Rogelj said.

Without drastically reducing energy demands, two decades of delay will mean only a 20 percent chance of staying below 2 degrees C, Rogelj said. A move toward a highly energy-efficient society would increase those odds to 50 percent. [The Reality of Climate Change: 10 Myths Busted]

In fact, conservation and energy efficiency (social and technological uncertainties) play big roles in making mitigation strategies such as carbon taxes or carbon capture more effective, the researchers found. For example, if carbon emissions were immediately taxed at $40 a metric ton, there would be an 80 percent chance of staying below 2 degrees in an energy-efficient world. The same carbon price would give only a 66 percent chance of hitting that temperature goal in an intermediate-demand world. In a future with a high demand for energy (20 percent greater than the intermediate scenario), carbon would have to cost $150 per metric ton just to reach that same 66 percent likelihood.

A low-energy future has upsides beyond climate mitigation, Rogelj said.

"If one can continue to prosper in the future and deliver the same services with less overall energy, this will in the first place save you money, but also very significantly improve your national energy security situation," he said. "It seems to me that such benefits should be appealing to any decision-maker who cares about the long-term development and prosperity of his or her country."

Even though the study examined more than 700 future climate scenarios, there are some limitations to its analysis. The research didn't take into account the cost of disasters such as coastal flooding if climate change is not mitigated. Nor did it consider "runaway climate change" scenarios. For example, if the melting of the permafrost releases trapped methane stores into the atmosphere, that gas could trap heat even more efficiently than carbon dioxide, sending temperatures soaring faster than expected.

The researchers' middle-of-the-road predictions for economic growth and population growth are also "somewhat optimistic," according to Steve Hatfield-Dodds of Australian National University, who was not involved in the study. That could mean that the estimated likelihoods of climate-mitigation success are also optimistic, Hatfield-Dodds wrote in an editorial accompanying the study in Nature.