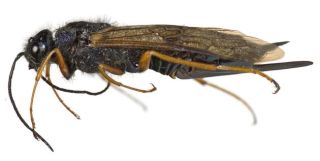 A feared alien bug from the Old World has been found in New York and may be poised to destroy pine trees coast-to-coast.

A single specimen of woodwasp, which has already wiped out up to 80 percent of pine trees in parts of New Zealand, Australia, South Africa and South America, was found in a trap in Fulton County.

Where there's one, there are likely more, said Cornell University entomologist Richard Hoebeke.

"Whenever you find an insect in a trap, it probably is established," he said. "The potential damage from this exotic woodwasp could be monumental."

The female is the first woodwasp (Sirex noctilio Fabricius) found in the eastern United States. Others have been intercepted at border control stations.

If it becomes established, the deadly pest could threaten pine trees across the nation, according to a statement from the university. Particularly at risk would be loblolly pines in Georgia.

The woodwasp is not typically a pest in its native habits in Europe, Asia and northern Africa. But it kills pines and some other conifers. When the female lays eggs, she secretes a toxic mucus and spores of a toxic fungus that penetrate bark and destroy a tree's sapwood, the vital region where nutrients and water are transported from roots to leaves.

The insect was found during a routine search of traps for bark beetles, another pest that is well established.

"I recognized it immediately," said Hoebeke, a taxonomic expert who has examined tens of thousands of insects sent to him over the past 25 years. "I'm always on the lookout for exotics -- for any species that are not yet established in the United States and known to be potential pests."

State and federal agencies have since set traps in various new locations to search for the woodwasp.

Since 1985, the U.S. Department of Agriculture monitoring U.S. entry points has intercepted seven male woodwasps hitching rides on tile and marble imports from Spain and Italy. One female was found in a warehouse in Indiana in 2002. Scientists suspect the latest find in New York arrived on a wooden crate or in packing material.

If an infestation is uncovered, then it's bug versus bug. Scientists would likely release a nematode that is a known enemy of the woodwasp.