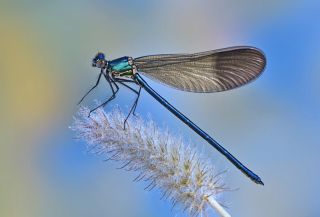 Dragonflies lack humans' big brains, but they still get the job done, according to new research that suggests that these insects have brain cells capable of feats previously seen only in primates.

Specifically, the dragonflies can screen out useless visual information to focus on a target, a process called selective attention. The new study, published Dec. 20 in the journal Current Biology, is the first to find brain cells devoted to selective attention in an invertebrate animal.

Selective attention is crucial for responding to one stimulus among the dozens of distractions that clamor for notice at any given time, said Steven Wiederman of the University of Adelaide in Australia.

"Imagine a tennis player having to pick out a small ball from the crowd when it's traveling at almost 200 kilometers an hour," Wiederman said in a statement. "You need selective attention in order to hit that ball back into play."

But little is known about how the brain locks onto its targets and ignores all else. To find out, Wiederman, who is from the university's Center for Neuroscience Research, and his colleague David O'Carroll turned to an unlikely animal. The researchers have long studied insect vision, and the dragonfly turns out to be quite adept in that arena. [Photos: Dew-Covered Dragonflies & Other Sparkling Insects]

"The dragonfly hunts for other insects, and these might be part of a swarm — they're all tiny moving objects," Wiederman said. "Once the dragonfly has selected a target, its neuron activity filters out all other potential prey. The dragonfly then swoops in on its prey — they get it right 97 percent of the time."

Using a glass probe with a tip 1,500 times smaller than a human hair, the researchers measured the neuronal activity that enables such amazing aerial hunting. A similar process is at work in the primate brain, O'Carroll said in a statement, but researchers weren't expecting to see the same thing in an insect that evolved 325 million years ago.

"We believe our work will appeal to neuroscientists and engineers alike," O'Carroll said. "For example, it could be used as a model system for robotic vision. Because the insect brain is simple and accessible, future work may allow us to fully understand the underlying network of neurons and copy it into intelligent robots."

Plenty of other insects have inspired robot designs. Swiss scientists, for example, have built a hovering drone that mimics insects in its ability to survive collisions with hard objects. Sometimes insects are recruited directly. North Carolina State University researchers reported in September that they'd managed to create cyborg Madagascar hissing cockroaches. The scientists wired a microcontroller to the insects' sensory organs, enabling them to steer the cockroaches' movements.