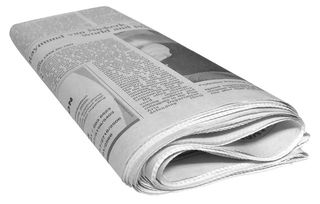 Photo taken by tijmen Adam Ciesielski. (adamci) There are no usage restrictions for this photo

He didn't invent printing. He didn't even invent movable type. He often ran into legal trouble and, when he died in 1468, he did so with little money or glory.

And yet today Johannes Gutenberg is one of the most celebrated inventors in history, chiefly because his chef d'oeuvre – the printing press – allowed his story, as well as the stories of thousands of others, to be set down on paper.

Gutenberg's printing press spread literature to the masses for the first time in an efficient, durable way, shoving Europe headlong into the original information age – the Renaissance.

Gutenberg often gets credit as the father of printing, but the Chinese had him beat, in fact, by a full thousand years.

Around A.D. 600, the Chinese invented a printing technique using wooden blocks with multiple words to press or rub texts onto paper. A few hundred years later they also developed movable type – with letters rearranged for each new page – but, with over 10,000 common characters in their language, the process was cumbersome and didn't catch on. A similar situation arose in Korea, where metal typesetting was invented.

The English language, miniscule by comparison, was the perfect candidate for movable type.

At the start of the 15th century, every English text had to be laboriously copied by hand. This was much to the chagrin of a growing, literate middle class, who had limited access to the written word. Johannes Gutenberg, an oft-unsuccessful German businessman, recognized the moneymaking potential of mass produced books and set about experimenting with printing methods.

Using the typesetting technologies of Asia, a modified recipe of oil-based ink and a design built on the olive and grape screw-type presses used by farmers across Europe, Gutenberg developed his famous printing press. The most important, original contribution was Gutenberg's letter molds, which he concocted from a metal alloy and which were very durable.

The new system was simple, still tedious, but much more efficient than anything that had ever existed before.

Each page of text was made up of individual letters arranged in a type tray. The process could take a full day of work, but that type tray was reused over and over again to produce multiple copies of a page and then would be reset for other pages without wasting the metal letters, making mass production feasible for the first time.

Gutenberg's first large-scale printing – a set of 200 illustrated Latin Bibles – rolled off the presses in 1455. Every copy had been pre-sold before he'd even set the last page.

Word spread quickly from Germany across the continent about Gutenberg's remarkable machine. Though the man himself died poor in 1468, losing his savings in a legal battle against a business partner, his system became a commercial success. At least a half million books had entered circulation by 1500, it is estimated, ranging from classical Greek texts to Columbus' account of the New World.

Literacy levels, still low among the general population in Europe, crept upwards as the cost of books steadily dropped and book fairs became yearly occurrences in most major cities during the early years of the Renaissance.

The printing press was one of the key factors in the explosion of the Renaissance movement, historians say. Access to standard works of science, especially, stimulated and spread new ideas quicker than ever. When Martin Luther nailed his first Ninety-Five Theses to the door of a German church in 1517, launching the Protestant Reformation, he had multiple copies made to hand out elsewhere.

Gutenberg's medieval machine was so capable that it remained virtually unchanged until the 19th-century and the advent of steam-powered presses.