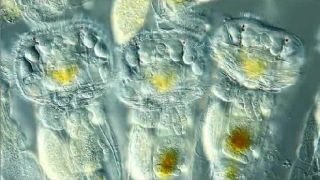 Incredibly detailed scenes of larva brains, butterfly scales and mini-crustacean claws — all captured through light microscopes — took some of the top prizes in the 2012 Olympus BioScapes competition, officials announced this week.

In its ninth year, the contest honors microscope images of life science subjects, and this year's highest prize went to Ralph Grimm, a teacher from the Australian town of Jimboomba, just south of Brisbane, for his 58-second video of tiny animals called rotifers on a lily leaf in his pond.

The footage shows astonishing movement inside what might otherwise look like a speck of pond scum to the naked eye. The creatures' cilia tremble, sweeping food into their mouths; the video also reveals the rotifers' internal organs and eyes (which look like red dots) through a photo technique known as differential interference contrast illumination. [See the Prize-Winning Images Here]

Siwanowicz also snagged an honorable mentions for his alienlike depiction of a slug moth caterpillar preparing to pupate; a delicate-looking portrayal of an oak lace bug (Corythucha arcuata), a common oak pest; and the appendage of a marine amphipod that's covered in featherlike hairs meant to trap plankton floating by.

Another image of the translucent claw of a crustacean, known as a pram bug, earned Christian Sardet and Sharif Mirshak of The Plankton Chronicles Project, fourth prize.

Other award-winning pictures showed the brain of a fruit-fly larva with eye discs attached, the wing scales of a Prola Beauty butterfly and the expanding mouth of a live mushroom coral.

There were more than 2,000 entries to the competition, with the winners announced Dec. 16 at a gala in San Francisco. First-place winner Grimm will get $5,000 worth of Olympus camera and microscope equipment. A selection of the images and videos will be displayed in a traveling museum exhibit that will tour the United States this coming year.