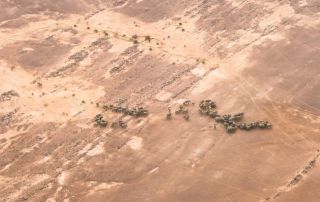 A group of elephants near Timbuktu makes an epic journey each year in their quest for food and water. Researchers found that they travel across an area of 12,355 square miles (32,000 square kilometers) in the deserts of Mali, marking the largest known elephant range in the world.

The animals' extreme journey is a product of life in harsh conditions.

"It's incredible these elephants have survived. They have a truly stressful life with the lack of water and food, and their giant range reflects that," said lead researcher Jake Wall of the conservation organization Save The Elephants, Kenya, and the University of British Columbia.

Wall and his colleagues attached GPS collars to nine elephants in the Gourma region in Africa in March 2008 and tracked the beasts over the next two years, finding that the elephants migrate south at the start of the rainy season in April and May over a large arclike path that extends into northern Burkina-Faso in West Africa.

The Gourma elephants don't necessarily walk farther than their East and Southern African cousins, but their movements are spread out over an area 150 percent bigger than those reported in Namibia, and 29 percent larger than those in Botswana, the researchers said. Interestingly, the researchers also found that males and females often take different routes — in fact they only share about a quarter of their ranges.

"We think the difference is partly because of their tolerances towards people. Bulls generally take more risks and occupy areas that have higher human densities," said Wall. "They also have varying food strategies, and we think that differences in the areas they occupy might be because of different vegetation types in those areas."

Though the elephants have been able to beat the heat and drought of their environment, researchers warn they might be threatened by violence in their politically unstable home, which has been wracked by an uprising of Islamist militants.

"We now fear that they may become victims of civil disturbance in the north of Mali due to the uprising currently taking place," said zoologist Iain Douglas-Hamilton of Oxford University, who is also founder of the London-based group Save The Elephants.

The research was detailed last week in the journal Biological Conservation.