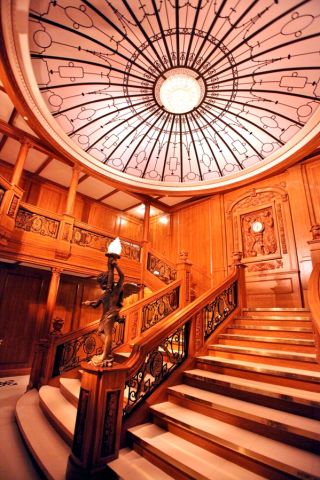 The exhibition includes a full-scale re-creation of the Ship's iconic Grand Staircase with an intricately carved clock showing the time of 11:40 p.m., the exact time that Titanic hit the iceberg.
(Image: © The Franklin Institute / Darryl W. Moran)

PHILADELPHIA — When you first enter "Titanic: the Artifact Exhibit" at the Franklin Institute, you are given a ticket with the name of somebody who was actually aboard the ill-fated ship. My ticket bore the name of Mr. Paul Romaine M. L. Chevré, a first-class passenger who was a successful sculptor. He was on his way to Canada to celebrate the opening of a hotel where one of his statues was to be unveiled in late April 1912.

Immediately after you enter, you get to see what an ordeal it must have been to build the magnificent vessel; there are photos of the throngs of workers at the dockyard in Belfast, Ireland, and tons of information about all of the work that went into building the Titanic. (It took more than two years to assemble a ship 882 feet ― 270 m ― long, or more than four city blocks, and more than 92 feet ― 28 meters ― high.)

Next you get to see some of the 300 of the exhibit's artifacts that were brought up by remotely operated vehicles from the wreck, including dishware, metal sconces, light bulbs and personal effects like combs and spectacles. The artifacts and signs on the wall allow you to imagine what it must have been like to be aboard the ocean liner.  [Titanic Quiz: Fact or Fiction]

Notable is the difference between first, second and third class, with the best kitchenware and décor reserved for those able or willing to pay for it. There are re-created first-class and second-class cabins, and a replica of the grand staircase, the "social hub" of the ship.

You get to know some of the prominent passengers, such as John Jacob Astor IV, one of the wealthiest men in the world at that time. One thing that surprised me was the large number of second- and third-class passengers who boarded the ship looking for a better life in America during a coal strike in England.

Bringing to life the passengers was a main motivation of the exhibit, said Steve Snyder, vice president of exhibits at the Franklin Institute. "It weaves together the actual objects on the ship with the actual people who were there," he told OurAmazingPlanet. "That's the real power of the exhibit. It's a true authentic experience; it's not about an imaginative story."

Then you walk through the infamous final hours of the Titanic, beginning with a sign bearing an ominous cable from a nearby ship, the Californian, sent at 10:55 p.m. on April 14, 1912: "Ice report: We are stopped and surrounded by ice." Of course the captain of the Titanic, Edward Smith, and First Officer William Murdoch did not heed these warnings, steaming ahead near full-speed. About 45 minutes later they would strike an iceberg, which would fill the boat with water and cause the Titanic to sink only 2 hours and 40 minutes later. [Video: How Exactly Did Titanic Sink? - With James Cameron ]

One particularly striking artifact is a pair of binoculars, which might have helped the watchmen on the lookout for icebergs had they not been misplaced during the final preparations of the vessel, only to be found decades later on the bottom of the ocean.

The exhibit records these final hours very well, illustrating the scale of the disaster and bringing the victims and survivors to life. We learn, for example, that Astor didn't survive, as he didn't take seriously the reports that the ship was sinking, and later wasn't allowed onto a lifeboat due to a "women and children first" policy. (His pregnant wife did survive, however.) We also hear stories of heroism and sacrifice. One notable tidbit is a statement from Ida Straus to her husband, who had encouraged her to get on a lifeboat: "Where you go, I go." The couple would die together. (He was 67, she was 63.)

We learn a little bit about the discovery of the wreck by Robert Ballard, and the difficulty of bringing up the artifacts, which were all slowly disintegrating at the bottom of the ocean. It was astonishing how much material actually did survive, including playing cards, postcards, bottles of wine and clothing. Many of the artifacts were sealed inside leather suitcases, often with identifying information that allowed the exhibitors to connect them to individual passengers' stories, Snyder said.

In the last room of the exhibit is a large, iceberg-like chunk of frozen water that visitors are encouraged to touch. This is, of course, how cold the water was on the frigid April night of the Titanic's demise. The room also contains the possessions of several passengers whose stories are told in plaques next to their belongings, such as those of Adolphe Saalfled, an English perfume-maker who survived the voyage while his perfumes sank to the bottom of the sea. Somehow, though, 62 of the 65 vials of perfume were brought up unharmed, and in the gift shop you can buy perfume made to smell identically.

In the final room is a plaque with the names of all the passengers and their fates. Of the 2,224 people on board, 1,514 lost their lives. I looked up my man Chevré and found that he was one of the 710 who survived.

Doing a little follow-up research, however, it's clear that Chevré was far from unscathed. Soon after the Titanic's sinking, he returned home to France, never to sail again. He died less than two years later, at the age of 47.

"Paul Chevré was a passenger on the ill-fated Titanic," read his obituary in the Montreal Gazette, according to the Encyclopedia Titanica. "Although he survived the shock, it is doubtful he ever recovered from it."

["Titanic: The Artifact Exhibit" is open through April 7, 2013, at Philadelphia's Franklin Institute.]