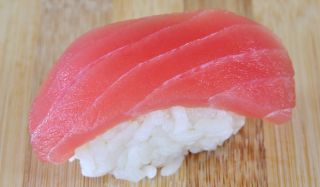 For consumers, this means the wild salmon you ordered might actually be farm-raised, and more troubling, the tilefish you were avoiding because of its high mercury content might end up on your plate anyway, disguised as red snapper.

Between June and September of this year, researchers with conservation organization Oceana collected 142 samples from 81 retail outlets across New York, mostly in Manhattan. Eighty-nine of the samples were from grocery stores, 28 were from restaurants and 25 were from sushi bars.

DNA tests showed that 56 of the samples were mislabeled according to FDA guidelines, putting the overall fish fraud rate in the city at 39 percent.

Of the 13 different types of fish studied, tuna was the most frequently mislabeled, with 17 out of 18 samples found to be frauds. Oceana officials say fish labeled as "white tuna" was usually escolar, a snake mackerel that has a toxin, which, when consumed in more than small amounts, can cause gastrointestinal problems like diarrhea.

A wide variety of fish was passed off as red snapper, from porgy to white bass to tilapia. One sham red snapper sample was actually found to be tilefish, which, because of its high mercury content, is on the FDA's do-not-eat list for pregnant women, nursing mothers and young children. Tilefish was also sold as halibut in another instance, the report says. [7 Foods You Can Overdose On]

Among retailers, 100 percent of sushi bars sampled had sold at least one mislabeled fish. The fraud rate at restaurants was 39 percent and 29 percent among grocery stores, with small markets found to be worse offenders than national chains.

Mislabeling rips off consumers and could pose health risks to those with dietary restrictions, Oceana officials say, and it's not a problem exclusive to New York. Previous studies found that the rate of fish fraud was 55 percent in Los Angeles, 48 percent in Boston and 31 percent in Miami.

Moreover, it's not easy to trace where the deception is taking place along the supply chain.

"As of 2011, the U.S. now imports more than 90 percent of the seafood consumed in this country," the group wrote in its report. "With an increasingly complex and obscure seafood supply chain, plus lagging federal oversight and inspection of rising seafood imports, it is difficult to identify who along the supply chain perpetrates the fraud."