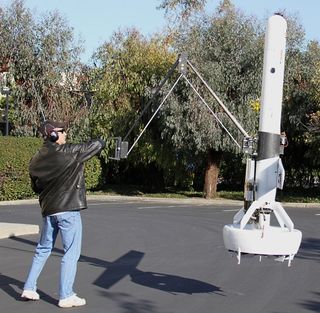 Look out humans — a robot floating in midair with a 6-foot arm now exists outside the realm of science fiction films like "Star Wars." The U.S. military recently tested a hovering drone's ability to attach its claw to a target object.

The "V-Bat" is a vertical takeoff and landing (VTOL) drone that can fly like a robotic aircraft and hover in place while standing upright on its tail, according to its makers at the MLB Company. The U.S. Defense Advanced Research Projects Agency funded work to make a "vision system" for V-Bat that allowed the hovering robot to attach its 1-pound claw to a ladder.

"Our goal with the unmanned aerial vehicle payload emplacement demonstration was to show we could quickly develop and integrate the right technology to make this work," said Dan Patt, DARPA program manager. "The success of the demonstration further enables the capabilities of future autonomous, aerial vehicles."

DARPA wants to construct future drones capable of precisely delivering small objects in tight spaces. V-Bat's vision system coordinated with the drone's onboard GPS so that the robot could approach and place its payload on the ladder as it hovered in midair.

The successful experiment could turn drones into even more capable delivery messengers for both the U.S. military and civilian uses. U.S. Marines already get deliveries from robotic helicopters in Afghanistan, but soldiers must attach and detach the helicopter payloads manually.

Many robot vision systems still struggle to accurately identify objects, let alone coordinate a midair handoff delivery. The experiment also proved challenging because a hovering robot does not necessarily represent the most stable platform. Many past hover vehicles have struggled to maintain stability in midflight.

Still, the V-Bat had a backup advantage in case of an accidental tip-over. It could survive due to its nose protection and a duct shielding its rotor and vanes.

The MLB Company's description of V-Bat suggests that the drone could one day carry out missions for the U.S. military ranging from aerial mapping to anti-piracy.