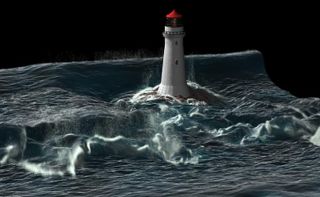 Daniel Day-Lewis, Tilda Swinton and the Cohen brothers weren't the only ones honored at this year’s Academy Awards. Ron Fedkiw, an associate professor of computer science at Stanford University also received a coveted gold statue this year for his groundbreaking work in liquid simulations. While people don’t usually associate computational scientists with movie stars, Fedkiw’s honor shows the impact of computer science on Hollywood and the rest of our lives. You've probably never heard of Fedkiw, but if you’ve seen the roaring ocean waves crashing around Johnny Depp in the "Pirates of the Caribbean" movies or the splattering lava flows in the final duel in "Star Wars: Revenge of the Sith," you’ve enjoyed his handiwork. Fedkiw conducts cutting-edge research into computational physics, a field that uses computers to simulate physical phenomena. These complex models and simulations are highly valued because they allow researchers to observe theoretical events or to predict how objects might behave under certain conditions. Fedkiw’s models are so accurate, however, that they can also transport moviegoers into another world. "A lot of my work was on computational methods for fluids and solids for computational physics applications," Fedkiw said last week. "It turns out to be quite useful for movies as well."

Offbeat path to Hollywood Fedkiw’s evolution from researcher to Oscar winner isn’t your typical path to Hollywood success. Growing up he didn’t dream of making it big on the silver screen or the world of physics. "I spent all my time playing sports and lifting weights," he says. Yet even then, what he calls the "purity and beauty" of mathematics appealed greatly to him. By the time he entered graduate school, he felt a strong pull to begin to put some of that elegant math to work in applied research. "I wanted to do things that had effects on real world problems," he says. While working on his PhD at UCLA, he began working on mathematical approaches to solid explosives research and other aspects of computational physics. His break in the movie business came in 1998 when he began working for a company that was producing 3-D water simulations using algorithms known as Navier-Stokes equations for a number of different customers, including Hollywood studios. A few years later he accepted an offer to work for Industrial Light and Magic (ILM), the legendary special effects company founded by George Lucas, creator of the "Star Wars" trilogies. While at ILM, Fedkiw teamed up with Nick Rasmussen and Frank Losasso Petterson to create a system to realistically simulate low-viscosity liquids such as water. The system has been so successful that Fedkiw, Rasmussen and Losasso were awarded a Scientific and Technical Academy Award at a ceremony in February. Fedkiw has worked on approximately 20 films, including some of the "Harry Potter" series, as well as "Terminator 3" and "Poseidon," two films he cites as among his best work. Despite the success and recognition his work has received, Fedkiw says he is his toughest critic. "Unfortunately I see all the problems with it, and I almost always want to do parts over again," he said. "There's a shot in Poseidon that makes me cringe, but other people really liked it."

Virtual humans Fedkiw is now working on simulating virtual humans, research that is supported by the National Science Foundation. 'My main focus these days has been on virtual humans and solid fluid coupling," he explained. "We’d like to do humans swimming, for example."

In addition to having many real-world applications, Fedkiw believes this work may end up on the silver screen someday as well. "If there was ever to be another Academy Award, I’d bet on [this] work," he said. For much of the past decade Fedkiw has been working in films while also continuing his academic research, where he relishes the freedom to explore new ideas and possibilities. "Every direction is wide open," he says of the life of a researcher, "and you get to go off and do whatever interesting bits you can find." He also says that he draws his inspiration and his energy from his students. "All my ideas are shaped through them," he says. Still, academic research and the movie industry have their ups and downs, and Fedkiw is used to rejections and uphill battles in both. His advice to anyone seeking a career in research is to take the criticisms in stride and keep working until you succeed. For now, Fedkiw and his colleagues can bask in the memory of their time in the Oscars spotlight. And despite his experience in the business, even he still gets star struck. "Getting an award from Jessica Alba was pretty cool," he said. "I’ve been a fan of hers for a long time."