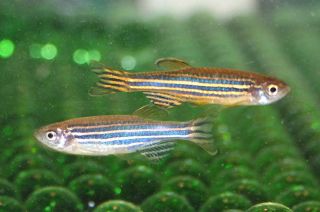 Sexual dichromatism becomes apparent during courtship in zebrafish: the one at the top is wearing its courtship colors.
(Image: © Vetmeduni Vienna/Zala)

New research shows that zebrafish suit up for sex, putting on different colors when trying to woo a mate.

The common home aquarium fish normally don't show any sexual dichromatism, or obvious differences, to human eyes at least, in the color of males and females of the species. But a group of researchers from the University of Veterinary Medicine in Vienna picked up subtle changes between the sexes when they studied zebrafish that were ready to mate.

The scientists used photography, computer software and human observations to study the color properties of zebrafish from both a wild and domesticated strain as they interacted with each other both in the morning, when mating and spawning occur, and again later in the day.

The team found that both males and females changed their dark and light stripes only during spawning, and that some sex differences in stripes only became apparent during this time. Male zebrafish that looked more colorful and conspicuous also engaged in courtship more often than less eye-catching males, the researchers observed, which suggests body coloration plays a role in the mating behavior of the species.

The research was published this month in the journal Ethology.