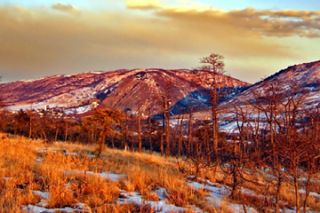 When the last of the zinc and lead mines of Kansas, Oklahoma, and Missouri shut down in 1970, the operations left behind a ghastly legacy across thousands of acres of poisoned earth. Nothing would ever grow there; nothing could live there. Erosion became a serious issue during rain storms, and the poisons spread in the running water. The soil became contaminated by high acidity, and toxic chemicals.

But now, researchers might have found a way to neutralize the ground to at least halt the erosion by using cow manure compost.

"The compost reduces the overall bulk of the toxic material and the heat it generates reduces pathogens and concentrates the inorganic nutrients," said Paul White, a research soil scientist at the Department of Agriculture's Sugarcane Research Unit in Houma, La.

No one will ever grow crops on the affected land again, White said, but it's possible to grow a ground cover that will stop erosion and it surely looks better.

The general area between Tulsa, Wichita, and Springfield, Mo., had been mined since the 1850s and was in full operation for 100 years. Besides smelters -- which left toxic sites -- the mines produced tailings called "chat," which added to the pollution.

The pollution is extraordinary. Bret Koehler, a geologist at the California Department of Conservation, said one abandoned zinc mine near Redding in Iron Mountain, Calif., is so bad that the Environmental Protection Agency designated it one of about 1,300 current Superfund sites in need of comprehensive clean-up. The soil produced one of the highest acidity measurements on Earth, Koehler said.

The aim of the Midwest experiment, White said, was to increase the carbon in the soil so that microorganisms that recycle nutrients could have a chance. The scientists also wanted to see whether the compost could reduce the lead and zinc.

They took 3-by-6 foot plots and spread either 20 or 120 tons of beef cattle manure compost to the land on some. White said they also filled in holes but none of them went very deep; the soil was compacted with the mining detritus. Then they spread switchgrass seed on all the plots and took samples over a two-year period.

The results were both visible and demonstrable in the lab. The soils in the plots with the highest amount of compost had a greatly elevated pH, meaning they were much less acidic. There was more phosphorus, nitrogen, carbon, and available water in the soil, all things plants need to survive and grow.

The nitrogen also fed the microorganisms that produce enzymes that convert phosphorous into something plants can use.

They also found that in the areas they used the most compost, the lead and zinc diminished, which meant less of it ran off in rainwater. The heavy metals attached themselves to the organics in the compost.

Still, White said, the lead and zinc remaining will "make it difficult for plants" to grow and he doubts the land will ever be fertile. The compost is not smelly, so the land is likely to be more pleasant than it was before the compost.

White said the experiment proved the compost treatment would work, but it was not exactly clear who would pay for the process. That would be up to the courts.

"No one wants to be responsible," White said. "There's no profit in it. You have to hire somebody to do it, and most companies don't want to get involved."

Koehler said the geology in the Midwest is unique so what might work there may not work in other areas.

Manure has proven useful in other ways. Also at the USDA, scientists have taken out a patent on a process that takes animal waste, including from chicken and swine farms to capture ammonia, the substance that makes manure smell. Not only were they able to decrease the amount of ammonia in the liquid manure, they could extract nitrogen useable for fertilizer by employing gas-permeable membrane filters.

The goal is to be able to fit the filters in manure pits at animal farms to reduce the smelly ammonia in the air and extract nitrogen farmers can use or sell for fertilizer, according to Matias Vanotti at the Agricultural Research Center in Florence, S.C.