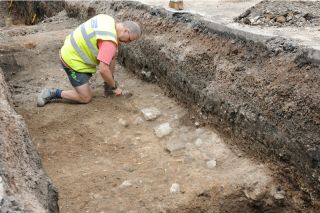 A mutilated skeleton unearthed from a medieval church in Leicester is undergoing testing to determine if it belongs to Richard III, an unlucky king of England who died in battle in 1485.

Archaeologists unearthed the skeleton in the choir of Grefriars, a medieval church that had been buried under a parking lot. Though the church had been lost, historical records suggest that Richard III was buried there after his death at the Battle of Bosworth Field, during the War of the Roses, an English civil war.

If the body is Richard's, archaeologists hope the find will shed light on a person known best through William Shakespeare's fictionalized account in the play "Richard III."

The skeleton is a good candidate for the lost king. It was found in the choir area of the church, matching historical records of the burial. The skeleton appears to be an adult male, and has a wounded skull — as if someone had cleaved it with an axe or sword. That would be consistent with a death in battle. A barbed arrowhead was also found in the skeleton's spine.

The skeleton also shows signs of scoliosis, or an abnormally curved spine. This would have made the man's right shoulder pop up higher than his left, which matches contemporary accounts of Richard III. (In later accounts, he's often incorrectly portrayed as a hunchback.) [Gallery: The Search for Richard III's Grave]

However, researchers have to be sure before they make any pronouncements on the skeleton's identity. They're currently subjecting the skeleton to a barrage of tests, including a computed tomography (CT) scan, which will allow them to reconstruct a three-dimensional image of the skeleton with flesh and skin overlaid. They eventually plan to reconstruct the man's face, though this procedure can be somewhat unreliable.

Soil samples from around the skeleton where the body decomposed, along with dental plaque, will help researchers find out more about the man's health and diet. Scientists have also extracted samples from the teeth and bones to attempt a DNA test on the skeleton. They'll compare any usable DNA with that of Michael Ibsen, a living descendent of Richard III's sister Anne of York.

Simultaneously, researchers are radiocarbon dating the skeleton to confirm the time of death — within about 80 years, that is. Specialists in medieval weaponry are consulting on the man's possible battle wounds.

"We are looking at many different lines of enquiry, the evidence from which all add up to give us more assurance about the identity of the individual," Richard Buckley, the director of the University of Leicester Archaeological Services, said in a statement. "As well as the DNA testing, we have to take in all of the other pieces of evidence, which tell us about the person's lifestyle — including his health and where he grew up."