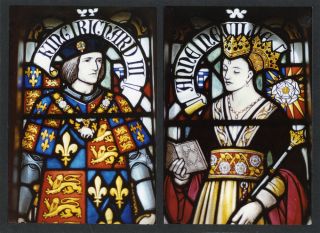 A skeleton found in the same boneyard where English King Richard III may have been buried might be one of the founders of the Church of the Grey Friars, archaeologists announced Tuesday (Oct. 30).

Scientists have yet to examine the female skeleton, though they are subjecting a male skeleton suspected to be Richard III's to rigorous testing. Nevertheless, the researchers said it was no surprise to find a woman buried at the medieval church in Leicester, England.

"We know of at least one woman connected with the friary, Ellen Luenor, a possible benefactor and founder with her husband, Gilbert," said Mathew Morris, the site director of the University of Leicester Archaeological Services.

Unfortunately, the definitive identity of the skeleton will likely remain a mystery, Morris said in a statement. The friary would have cared for the destitute and homeless, he said, so the woman could be a pauper as well.

"[W]ithout knowing where Ellen Luenor had been originally buried, we are unlikely to ever know who the remains are of, or why she was buried there," Morris said.

The female bones had been dug up and reburied at some point in the past, said Richard Buckley, the lead archaeologist on the project to find Richard III's bones. The medieval church site was later transformed into the garden of a mansion house during the 1600s, which may have been when the bones were disturbed, Buckley said in a statement. [See images of the Richard III discoveries]

The female skeleton is merely a sidelight in the project, which aims to find the bones of the lost King Richard III. The monarch ruled England from 1483 and 1485, before dying in battle during an English civil war. Historical records show that Richard III's remains were taken to Leicester and interred in the Church of the Grey Friars. However, the grave — and the church — were eventually lost.

Plenty of unsubstantiated rumors about Richard's body popped up in later centuries, including one myth that his bones were dug up and thrown in a river, and another claim that his coffin was used as a horse-trough. In fact, archaeologists have now found a skeleton in the church with battle wounds and a distinctive curved spine that matches historical descriptions of the lost king.

The team is careful to say that they're not sure they have found King Richard III, only that the skeleton warrants further examination, including DNA tests. Results are expected in January.