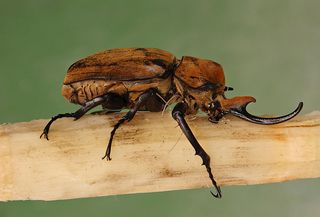 When it comes to enormous insects, the movies may have it partly correct. Many of the world's biggest insects — take, for instance, the African goliath beetle, which can weigh up to 100 grams (about as much as a peanut-butter-and-jelly sandwich), or the giant stick insects of Indonesia, which can grow up to 2 feet long — congregate in the equatorial tropics.

Abundant food, a year-round growing season and warm weather are all reasons that big insects thrive in the tropics, said Matan Shelomi, a graduate student in entomology at the University of California, Davis.

For animals, such as mammals, that rely on internal heat, it pays to be bigger in the colder climes. The smaller surface-area-to-volume ratio of larger animals helps them reduce heat loss through their skin, a pattern known as Bergmann's rule. If you are an insect that largely obtains heat from the outside environment, you may stand to benefit from following an opposite pattern, said Shelomi.

But not all groups of insects follow the same set of rules, Shelomi reported in a study detailed in the October issue of The American Naturalist. He found that across a given species' range, insects are just as likely to show a Bergmann-like pattern as they are to show a "converse-Bergmann" one or no pattern at all.

Larger-bodied insects such as beetles and grasshoppers, whose bodies take longer to develop, may be more likely to stay smaller in colder climates, where the growing seasons are shorter, than other insects that reproduce and grow quickly, like flies.

When it comes to determining patterns in insect body size, found Shelomi, microclimate matters much more than coordinates on a map. A microclimate is a small area with a distinct temperature and weather pattern. It can be as small as a garden or as big as a mountain slope.

"It doesn't matter where an insect is on Earth — if it finds a small patch of ground that is warm and favorable for growth, it makes all the difference," he said.