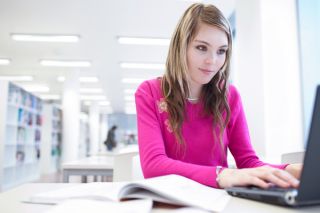 Parents are often faced with a wide number of choices for products for their children, from essential safety items such as car seats to optional, but potentially useful, health items such as pedometers.

Two of the major questions parents must weigh are durability and cost. Children only use or need most products for a limited amount of time, and many are available cheaper on the secondhand market.

Gordon said the few items she would consider buying secondhand are those that can be well-cleaned, and are not primarily used for a child's safety, such as plastic toys or play sets, and clothing.

"Everything else, I'm pretty cautious about," she told MyHealthNewsDaily.

While the price of new products is higher, Gordon said some of that cost can be made up for by reusing a product for later children.

"At least if it's yours, you know the history of the product," she said.

Gordon recommended two websites for parents to use when checking out products. The first, recalls.gov, is where the Consumer Product Safety Commission (CPSC) lists its recalls. The second, saferproducts.gov, lists recalls and also reports filed by parents who are disgruntled with a particular product.

In addition to giving you a better idea about the product, Gordon said, that site can help you understand if the problem is the product or the user.

Here's a look at seven gadgets aimed at improving kids' health, along with expert tips for what parents may want to consider when making a purchase.

Gordon said two important things to take into account are how far you want the monitoring to extend, and how far you are from other monitors.

If you have close-by neighbors who also have babies, "Definitely go with the digital model, because interference is a big deal with baby monitors," she said.

Neighboring parents will sometimes get the same baby monitor, and then find they can see a neighbor's baby when they turn it on, which presents both a security risk and a privacy violation.

Certain other electronics can interfere with monitors as well, Gordon said, so parents should check the frequency of other devices they use in the home (such as Bluetooth) and test the monitor right away.

"You want to make sure you can return the product if you can't deal with the interference," Gordon said. "Know the return policy for the store."

One other thing to look out for, she said, is a long cord attached to the monitor —because baby monitors are often placed near the crib, a long cord presents a strangulation risk.

Some monitors offer the possibility of watching even when you are away from home and a sitter is caring for the child, but, Gordon cautioned, "I would say, 'How connected do you want to be?' That can drive some parents crazy, because they feel the need to be hypervigilant, and sometimes when you put your baby down, you just need a break."

The most important test with a car seat, Gordon said, is ensuring that the model you want fits in your car, so see if the floor model at the store can be taken out to see that it does.

"Car seats can be kind of big, and with small, fuel-efficient cars it can be a tight fit," Gordon said. "If you're buying a convertible car seat [where size can be changed as the child grows], they can be pretty big, so you want to test it in the forward- and rear-facing position."

Gordon added that she would advise parents to buy an infant-size car seat at first, because it has a snugger fit, and buy a larger size when the child grows, remembering that the infant seat can be used with future children.

However, she said, parents should be mindful and read the product information, as car seats have expiration dates even if they are not involved in accidents, and do need to be replaced.

The next step after buying a car seat is taking it to a police station or another location in your area where a knowledgeable person can help you ensure the seat is installed properly. A website is provided by the National Highway Traffic Safety Administration at http://www.nhtsa.gov/cps/cpsfitting/index.cfm.

For parents who opt to buy a baby carrier, Gordon recommends against slings, where the baby is lying down, as many were recalled in March 2010 because of the suffocation risk they pose.

One thing many parents don't think about, she said, is that heat can make the baby carrier unbearable, and so for parents who live in a hotter climate or who will be using their baby carrier during the summer, "you want to buy one that's meshier." One example she gave was the Baby Carrier Air from BabyBjorn, which costs more, but is made with mesh material.

In general, Gordon said, parents should look for extra padding for their own back, shoulder straps that are fairly wide to better distribute the infant's weight and buckles that are easy for them to use, but not so simple the baby can undo them.

Carriers should only be used until a baby reaches 20 pounds. "An older baby could just start fiddling with it," Gordon said. "One minute you could think you're secure, and the next minute you're not."

Many parents do not need a stroller immediately after a child is born, so Gordon recommended purchasing a stroller that is simply a frame that can be paired with the infant's car seat, giving the parents time to delay the decision about what stroller they need.

Strollers especially are worth spending money on, she said, as kids will often still be using them when they reach age 5, and long trips to the mall or an amusement park mean they can't stay on their feet all day.

One thing to look at, she said, is the storage area, as it often gets used like a shopping cart. The area needs to be accessible, even when the seat is reclined, and it needs to be large enough.

"If the storage basket is too small, or you can't get to it, you're going to use the handles for all your stuff," she said, which presents a tipping hazard.

Another thing to consider is the environment where you will be using the stroller, she said. Parents who live in colder climates with snow or rocks will need bigger tires, while parents in the city need to find a lightweight model that can easily be moved on and off public transportation.

An important issue regarding software aimed at keeping kids safe online is the amount of devices that will be used. For families with one or two computers, the best option may be software designed for the computer alone.

For larger families, or families with older children who may have their own computers, the best option may be software that works with the Internet router, which is the hub through which all the Internet traffic in the house passes.

Some programs are designed with specific aims in mind. Parental monitoring software generally lets parents keep an eye on their kids' browsing, while Facebook control software is specifically for protecting kids while on Facebook.

Recent concerns have also arisen regarding ads that track online behavior, as many will track children under 13, despite existing legislation. Most browsers allow these to be blocked (see http://donottrack.us/).

However, given children's ability to access the Internet in many places outside the home, software is unable to replace teaching children what constitutes safe and unsafe online behavior. Microsoft provides some guidelines (http://www.microsoft.com/security/family-safety/childsafety-internet.aspx).

There is also software that works on cell phones that can help parents keep an eye on their kids' mobile life.

Parents with pools should check state laws, because a number of safety measures are likely needed if you have a pool.

Pool alarms can be an added safety measure, designed to signal if a child falls into a pool or enters a gated area.

Testers have recommended against models where children be must wearing a special wristband to activate the alarm, as they will not help a child who simply leaves the house to go to the pool, and will not prevent a drowning if a neighbor's child happens to fall in.

Consumer Reports and Good Housekeeping have both tested pool alarms, including whether an alarm sounds fast enough and whether it sounds a false alarm under heavy winds.

When discussion turns to childhood obesity, the topic of diet often arises. But physical activity is typically a more constructive step.

"Being active is very important, and even if your weight doesn't change, you can be healthy [from a cardiovascular standpoint]," said Dr. Stephen Pont, a pediatrician at Dell Children's Medical Center in Austin, Texas, and chair of the American Academy of Pediatrics' Provisional Section on Obesity.

As far as pedometers go, Pont said, "I think they can be a helpful tool for some kids to track what they're doing and to help them do more."

The type of pedometer that may work best for you will likely depend on your family and your child, as activity monitors — which can include pedometers along with more expensive accelerometers, which measure all activity and not just steps — can range in price from under $10 to more than $100, and run higher with software.

Pont noted that a recent trend by some companies had been linking a pedometer or accelerometer to a computer program that tracks progress and can award prizes.

But, he said, "I think that a lot of kids will enjoy them for a bit, but might become bored with them."

For parents who want to use a pedometer, he said, gauging how interested their child is, and finding ways to motivate them to be physically active is a larger part of the challenge.

Pont recommended introducing a pedometer as part of a new family activity, rather than as a weight-loss program, which children may find discouraging.