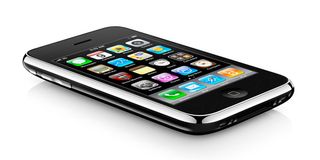 Millions of people get messages on their iPhones, but can a new app send messages from beyond the grave?
(Image: © Apple)

Americans are increasingly turning to their mobile devices for help with their health care needs.

That's the conclusion of a new report that finds that new technologies make it possible for "wearable" mobile health devices, such as heart monitors, pedometers and other devices, to communicate with users' smartphones.

While Americans have been downloading and using health-related apps for the past few years, the latest technologies allow their mobile handsets to easily connect to wearable devices that in turn can deliver more functions and accuracy and appeal to sports and fitness applications.

This new technology is creating all sorts of possibilities for users who want to monitor their own health or workouts, and store and use the data in their phones, tablets or computers.

Soon, however, smartphones will come embedded with Bluetooth technology, enabling them to receive this data directly. That, according Jonathan Collins, principal analyst at ABI Research, a firm forecasting trends in global connectivity and emerging technologies, which conducted the research, will change the way people monitor their health forever.

Collins said this kind of mobile health monitoring has been, until now, mainly the purview of professional athletes. Now, however, technology is making it possible for anyone to use and collect data from all sorts of health devices, including heart monitors, pedometers, activity sensors and sleep sensors.

Collins predicts these technologies will enhance the effectiveness of fitness applications by transmitting data between wearable devices and mobile handsets, thereby enhancing the workout experience for users.

Several companies have already taken notice of this emerging market, which until now, consisted of mainly proprietary arrangements between companies such as Nike and Apple. Now, the widespread availability of this mobile connectivity will open the market to a whole new generation of products.

One such new product comes from GPS manufacturer Garmin, which recently launched its Fit application for smartphones. This application automatically links a person's activities and recorded workout history with the Garmin Connect Web portal to keep track of fitness goals.

Sports and fitness applications will be the driving force behind this increase, but they will be aided by the growth of home monitoring health care and personal emergency response applications that will be utilized by growing numbers of aging users. According to the research, smartphones and applications that run on these devices will challenge existing fitness devices in coming years as more apps become available on smartphones.

"Downloadable apps are moving the sports tracking device market from proprietary devices to mobile phones, but adoption has been limited by the data they can collect," said Collins. "However, with the connectivity that Bluetooth Smart will embed in mobile handsets, wearable devices will bring greater detail to mobile handsets."