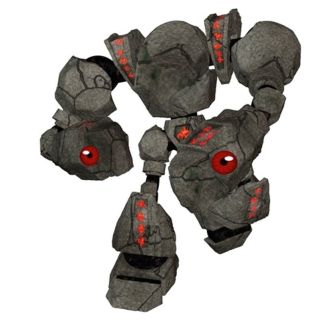 Can you look this monster in the eyes? Turns out mere mortals gaze at non-human monsters in the eyes even if those peepers are located in bizarre places.
(Image: © © Tom Foulsham)

Using the fantasy game Dungeons & Dragons, scientists now find one way that people can treat monsters like people too, looking them in the eyes even when those eyes are not located in their heads.

These findings could help researchers better understand autism, where people often fail to meet the eyes of others.

Animals, including birds, dogs, goats, seals, dolphins, monkeys and humans, follow the gazes of where others look. This act of literally seeing others' point of view may have played a key part in the evolution of human socializing.

One question is whether or not people are biased to look at the eyes of others, or simply at the middle of faces where the eyes happen to be. Different brain areas are involved in looking at different parts of the body — the region known as the superior temporal sulcus is biased toward the eyes, while the nearby fusiform face area is fixated on the middle of peoples' faces.

Learning more about how people aim their gaze relative to that of other species could help to shed light on how these brain mechanisms evolved. It might also yield insights on what brain mechanisms might be compromised in disorders such as autism.

Into the eyes of a monster

To find out, researchers showed 22 university students images from Dungeons & Dragons depicting a range of characters: people; humanoid creatures with eyes in the middle of their faces, such as the game's dragonlike draconians and robotlike warforged; and monstrous creatures that either had eyes positioned outside their heads or lacked heads altogether, such as the amorphous gibbering mouther.

The investigators used cameras to track eye motions of the volunteers, who looked early and often at the eyes, even when it came to monsters.

"I thought that people might eventually look at the eyes of monsters, but really doubted they'd look at them quickly," said researcher Alan Kingstone at the University of British Columbia in Vancouver. "I was truly shocked that people target the eyes about as quickly and as much as human eyes despite the fact that human eyes have the benefit of being located in a reliable position — that is, middle of the head in the front of the face." [Tales of Our 10 Favorite Monsters]

These findings suggest that people normally target the eyes, and not the middle of the head.

"I think that we should test people with autism, or students who vary on the autism quotient scale — more or less autism-like traits — to see if monster eyes are looked at less frequently and/or later when one is a person with autism and/or has autistic traits," Kingstone told LiveScience. "The prediction is that they should, and so as silly as it sounds, using monster stimuli might help to screen for autism. When it comes to human faces, people who are autistic often look typical on lab experiments because they may have been taught to look at the center of the head to target the eyes."

Dungeons & Dragons designer Bruce Cordell said these findings "resonate with me. The most effective visuals, speaking as a fantasy designer and also as someone who enjoys a good supernatural thriller, is when something I don't expect to be alive suddenly opens its eyes. Whether those eyes are regular-sized, or the size of manhole covers, their sudden opening incites a startling transformation, because my brain suddenly bestows the quality of purpose to what it thought was inert,” Cordell said.

"On the monster-design and monster art side of the question, I think these findings clearly indicate that the most effective monsters, or at least those monsters designed to portray purpose and intent, are ones with discernible eyes," Cordell sadded. "Personally, I'll stay clear of designing eyeless sludges in the future. However, if I must design a sludge, goo, or other wholly non-anthropomorphic creature, I'll throw in eyes, too."

Incidentally, Julian Levy, Kingstone's son, was 12 years old when he proposed the study and collected the data. He is now 14.