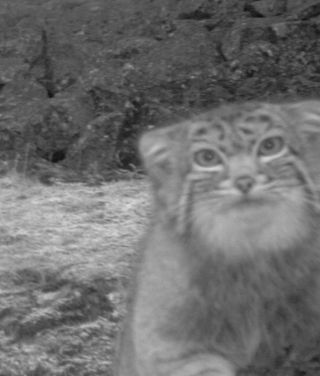 An elusive thick-furred feline has been caught on camera for the first time in the Himalayan kingdom of Bhutan.

A camera trap captured images of the fluffy Pallas's cat, also known as the manul, in the country's sprawling Wangchuck Centennial Park (WCP), which is also home to the snow leopard and Himalayan black bear. Pallas's cats had never been documented in the region before, according to the World Wildlife Fund (WWF).

"This is an exciting and remarkable discovery that proves that the Pallas's cat exists in the Eastern Himalayas," Rinjan Shrestha, a conservation scientist with WWF, said in a statement. "This probably indicates a relatively undisturbed habitat, which gives us hope, not only for the Pallas's cat, but also the snow leopard, Tibetan wolf and other threatened species that inhabit the region."

The cat is a primitive species that has evolved little in the past 5 million years. It's about the size of a house cat and slightly resembles a Persian cat with its flat face, high-set eyes and thick coat, which keeps it warm at high altitudes. The Pallas's cat's distinct gray fur with dark spots on its head also helps it blend in with mountainous habitats across Central Asia.

Bhutan's park service and a WWF team surveying snow leopards in the region set up the camera traps, which first snapped a photo of a manul in January, then in February and April. In one shot, the cat appears to be sneaking right up to camera in for a close-up, staring right into the lens from the bottom-right corner of the frame.

The Pallas's cats are vanishing from some parts of Central Asia, including the Caspian Sea region and Pakistan's Baluchistan province, and the International Union for Conservation of Nature (IUCN) has listed it as a near threatened species. Poachers target Pallas's cats for their fur, as well as their fat and organs, which are used in traditional medicines in Mongolia and China, according to conservationists.

Bhutan might be a good place for the cats to take shelter. More than 60 percent of the country is under forest cover, and a quarter of its territory has been designated as national parks or protected areas, with its rugged mountains and valleys considered hotspots for biodiversity.