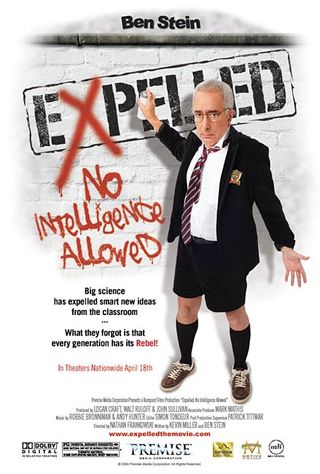 NEW YORK — A handful of journalists filed into a small theater at the Park Avenue Screening Room here last night to see a preview for "Expelled: No Intelligence Allowed." The 90-minute documentary-style flick features Ben Stein, a comedian, lawyer, actor and former speechwriter. It is a movie about the so-called debate between supporters of "intelligent design" and Charles Darwin's scientific theory of evolution.

Filmmakers proclaim in press materials that Stein "discovers an elitist scientific establishment that has traded in its skepticism for dogma" during the course of the movie through interviews with scientists and anti-evolution advocates.

Some scientists, however, are outraged about the conduct of the filmmaker during production and screening as well as the film's effort to tie Darwin's ideas to Hitler. One prominent scientist who is in the movie has since called it shoddy and sinister.

Intelligent design, or ID, holds that life on Earth is so complex that evolutionary theory can't explain the complexities, so life must have been designed. Scientists see it as creationism veiled in pseudoscience, an effort with religious backing designed to generate the appearance of controversy among scientists about Darwinian evolution where there is none.

ID has made headlines in recent years in Kansas, Ohio and Michigan as school boards and courts contested its teaching in public schools alongside evolution, which is a scientific theory holding that new species appear via gradual changes in inherited traits and mutations. In 2005, a federal judge barred a Pennsylvania public school district from teaching ID in biology class.

The basic principles of neither evolution nor ID are clearly explained in the movie.

"Expelled" is smattered with gloomy scenes of the Berlin Wall's construction, the Holocaust and other World War II-era footage, with Stein arguing during the course of it that a handful of academics have been persecuted for their beliefs that run counter to the scientific establishment.

Many of the ID supporters and sympathizers Stein interviews in the movie, however, were let go, not offered tenure or other career incentives because of expired contracts, improper publishing ethics and other conduct unrelated to their religious views, according to university and institution spokespeople who appeared in "Expelled."

Stein claims he "encountered many more [academics] who didn't want to appear on film," because of their fear of being persecuted.

But among the millions of scientists currently working in schools and institutions across the world, thousands of whom are trained evolutionary biologists, the overwhelming consensus is that evolution is a well-supported theory backed by observations in several fields using multiple lines of evidence.

Scientists interviewed in "Expelled," namely evolutionary biologists Richard Dawkins of Oxford University and Paul Zachary "PZ" Myers of the University of Minnesota and author of the blog "Pharyngula," have been crying foul since the movie's name was changed last year.

The two have written on their Web sites and blogs that the original film was called "Crossroads: The Intersection of Science and Religion" based on correspondence with Mark Mathis, the movie's associate producer at Rampant Films. But in late 2007 the movie title was changed to "Expelled" for marketing reasons, the producers reportedly said.

In a press release issued by Premise Media, which has also helped finance "The Passion of the Christ" and "The Chronicles of Narnia" movies, film producer Walt Ruloff claims the makers avoided distorting interviews.

"The incredible thing about 'Expelled' is that we don’t resort to manipulating our interviews for the purpose of achieving the 'shock effect,'" Ruloff said.

But Michael Schermer, editor of "Skeptic Magazine" and an on-screen interview in the movie, said Stein and Mathis asked him the same question a dozen times during his interview for the film to extract an answer they were looking for.

"In frustration I finally said something like 'Do you have any other questions to ask me or do you keep asking me this question in hopes that I'll give a different answer?'" according to a statement by Schermer on richarddawkins.net.

Dawkins, Myers, Schermer and others are also outraged by the claims in the movie, especially that Charles Darwin's evolutionary theory is partly responsible for Nazism and the Holocaust.

In the film, after Stein is told of this purported connection by several ID supporters, who also tell him that Darwin's ideas of species fitness led to U.S. eugenics programs in the 1920s, Stein stares down a dimly lit statue of Darwin in London's Natural History Museum.

During a March 28 telephone press conference for "Expelled," Myers snuck in on the call and confronted the filmmakers about the issue. "Have you ever heard of a pogrom?" Myers asked. "Those have been going on for centuries." (A pogrom is an organized massacre of helpless people.)

On his Web site, Dawkins wrote that the Darwin-Nazi association is a fallacy.

"The alleged association between Darwinism and Nazism is harped on for what seems like hours, and it is quite simply an outrage," Dawkins said of the series of scenes in the movie. "Hitler was ignorant and bonkers enough for his hideous mind to have imbibed some sort of garbled misunderstanding of Darwin but it is hardly Darwin's fault if he did."

During a March 20 screening of "Expelled" at the Mall of America in Minneapolis, which Myers registered to attend via a public Web site with his family, he was asked to leave by security while standing in line.

The security guard said a film producer gave the orders to remove Myers from the theater.

According to various news reports, producers accused Myers of being a "gatecrasher" — someone trying to attend an event uninvited — but he was registered for the event via the open, online registration process. Dawkins, who also registered to attend the screening, saw the documentary without incident along with Myers' family.

"It's an incredible piece of inept public relations to expel somebody … from a film about expelling people for their opinions," Dawkins said during a videotaped discussion with Myers, "a film in which [Myers is] present, and acknowledged and thanked in the acknowledgements at the end of the film."

The overall mood of the film, as its makers assert, is satirical and sarcastic — and almost always at the cost of the scientists backing evolutionary theory. When Dawkins discusses scientific hypotheses for the seeding of life on Earth from another planet, for example, the film quickly displays black-and-white movie clips of flying saucers and aliens.

Dawkins said in the video on his Web site that he was unimpressed with the artistic direction of "Expelled."

"I'm not a professional filmmaker myself but I've had a lot to do with making documentaries," Dawkins said. "This was a very, very shoddy, poor, inartistic piece of work."

Dawkins also noted that images of guillotines, firing squads and other reactionary film clips that flashed between the words of sources especially garnered his dislike. "It was worse than just artless, it was also quite sinister," he said. "It was a bad film in every way."