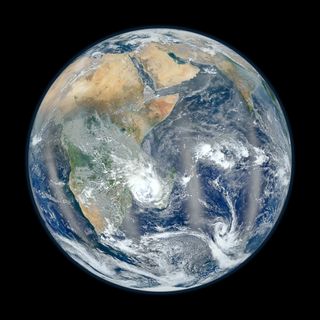 With the debates over and nary a word on climate change, many are asking what the significance of the silence means. This is the first time in decades that climate change has not been addressed during a presidential debate. But raising the issue during the debates in the past has not necessarily resulted in improved understanding of the science or significant action to pass emissions standards through Congress.

And the silence itself has raised probably more news coverage of the subject than it would have gotten if either President Barack Obama and Governor Mitt Romney had voiced their talking points.

Perhaps the key reason for the dodge on this politically (not scientifically) hot button issue is the same as for many others: avoidance technique. But despite getting left on the cutting-room floor, climate change, the stimulus law, gay rights and the definition of marriage, Supreme Court nominations and other policy questions will remain "decisions the next president will have to make," as the Washington Times reported.

Climate change however is not a "niche" or special interest issue. And during last night's debate, which focused strongly on foreign policy, climate change should have been a natural fit. Climate change is, as Stephen Stromberg reported in the Washington Post:

"Global warming hasn’t been much of an issue on the campaign trail either," noted Politico. "Romney almost never discusses climate change, reserving most of his energy-related comments for criticism of the president’s policies on renewables or support for coal-producing regions."

When pressed about avoiding the issue as well, the Obama campaign distributed a memo last weekend that had a count for how many times the President had said climate change while campaigning: 15 times since July 23.

The "climate silence" of 2012 is not falling under the radar. A website that tracks just how often the subject has been raised since 2008.

Though despite providing major talking points about climate change in 2008, in 2009 at the climate conference in Copenhagen, Obama left many disappointed with the lack of vision and leadership the United States was offering the world.

Talking -- or not talking -- about the issue isn't going to help the U.S. mitigate or adapt to climate change. What is needed is action and a president that can work with Congress to make carbon pollution laws a national priority.