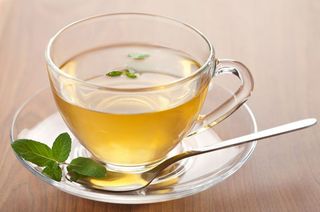 Research has revealed at the cellular level how green tea might prevent breast and prostate cancers. However, the studies used green tea in its extracted or pure form; most supermarket versions only contain small amounts of actual green tea.
(Image: © Olga Miltsova | shutterstock)

Doctors have speculated for years on the possible benefits from drinking green tea. The ancient brew has been associated with just about everything healthy, from boosting the immune system to preventing and reversing chronic diseases.

Health studies on green tea, however, have been promising but not conclusive. But now doctors have better identified, at a cellular level, how green tea might prevent the spread of breast and prostate cancers.

This finding, based on an ongoing study of 40 women with a type of breast cancer that doesn't respond to hormone therapy, was presented today (Oct. 18) at the 11th Annual International Conference on Frontiers in Cancer Prevention Research in Anaheim, Calif. This same mechanism might be behind positive results seen among prostate cancer patients, also presented today by a separate team of researchers at the same conference. [Top 10 Cancer-Fighting Foods]

Those women receiving green tea extract had significantly lower levels of the tumor growth factors at two months into the treatment. While differences between those receiving a placebo and those receiving the extract were not as significant after four and six months, this was perhaps due to patients not keeping up with the pills, Crew said.

One goal of this ongoing study is to establish an appropriate dose of the green tea extract — the study levels were equivalent to eight to 24 cups of pure green tea — and Crew remains hopeful her group can identify this optimal level for the best therapeutic effect, she told LiveScience.

"This study was too small to say for sure if green tea will prevent breast cancer, but it may move us forward in terms of understanding antitumor mechanisms," Crew said.

Crew's work builds upon a smaller study of 26 men with prostate cancer, published in 2009 by a team led by James Cardelli of the Louisiana State University Health Sciences Center in Shreveport, La. Cardelli found similar reductions in the same growth factors with Polyphenon E.

A newer study on prostate cancer, presented at today's meeting, had participants drink lots of brewed green tea, not the extract. This study, led by Susanne Henning, an adjunct professor at the David Geffen School of Medicine at the University of California Los Angeles, involved 67 men about to undergo a prostatectomy, the removal of an enlarged or cancerous prostate.

In the weeks before the procedure, these men were randomly assigned to a regimen of drinking either six cups of brewed green tea or water daily. Those who drank the green tea had significantly lower levels of prostate-specific antigen (PSA); elevated PSA is associated with prostate tumor growth.

Although Crew said it is still too early to recommend green tea to prevent cancer, she added that researchers are conducting several ongoing studies to explore the use of oral green tea extract in high-risk women for the primary prevention of breast cancer.

These studies used green tea in its extracted or pure form. Those hoping to reap healthful benefits of green tea should note that most tea products in the supermarket contain only small amounts of green tea and are often mixed with sugar or other flavors.

In Japan, where green tea consumption is high, prostate and breast cancer rates are about three times lower when compared with the United States, according to the World Health Organization, although differences could be attributed to other dietary factors.

The Frontiers in Cancer Prevention Research conference is hosted annually by the American Association for Cancer Research.