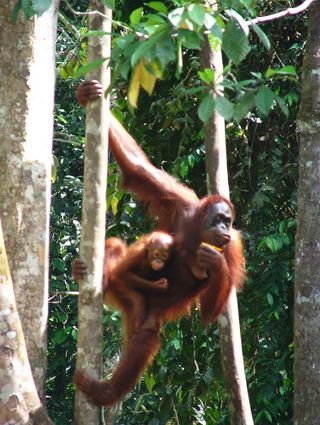 The orangutan faces a bleak future with widespread conversion of its habitat into palm oil plantations that have decimated wild populations.
(Image: © Eleanor Briggs)

Sumatran orangutans are in trouble: Only about 6,600 of the animals are left, scattered throughout the northern tip of the Indonesian island where they once flourished.

A new genetic study of the animals has found that deforestation on Sumatra has isolated different groups of the primates, which could lead to inbreeding and further decline. But the research also identified a critical corridor of forested hills that orangutans still travel though, which, if protected, could help the species rebound, according to a release describing the study.

The investigators took DNA from wild orangutan's hair and fecal samples, as well as blood samples from orangutans from known areas that were kept as pets before being confiscated by authorities.

Their study, published recently in the Journal of Heredity, found that there was recent genetic exchange between several of the groups by breeding males. "Our study revealed that some males can range widely over large distances and across natural barriers in search of females," said co-author Alexander Nater, a researcher at the University of Zurich in Switzerland, in a statement.

Male apes use the passageway the study found to get around the headwaters of rivers high in the mountains. It's critical that these areas remained forested, the researchers say, since the critically endangered orangutan spends nearly all of its time in the canopies of trees.

"This result highlights the need to conserve these important dispersal corridors to uphold genetic exchange," Nater said in the statement.  "And it also gives hope that it is not yet too late to preserve these unique Asian great apes."