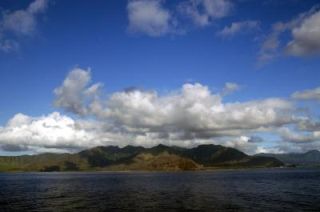 Clouds and rain, as seen here over the island of Oahu, are influenced by trade wind patterns.
(Image: © Chris Ostrander, University of Hawaii at Manoa, SOEST.)

The winds are changing over the Hawaiian Islands: There are fewer days with northeast trade winds than 40 years ago, a new study finds. Because the trade winds bring rain and clear out volcanic smog, the change could mean more drought and more hazy days for the island chain, the researchers report.

Scientists from the University of Hawaii at Manoa analyzed wind records from 1973 to 2009 at the major airports in Hawaii: Lihue, Honolulu, Kahului and Hilo. They also collected data from four weather buoys in waters around the islands.

For Honolulu, northeast trade winds dropped from 291 days per year to 210 years per year over the 40-year period, the study found. The two largest decreases occurred in 1981 and 1997, both years with strange weather. An anticyclone (or high-pressure system ) in 1981 shut off the northeast trade winds, causing a major drought, while in 1997, the strongest El Niño event ever recorded weakened the northeasterly trades.

The researchers also discovered the trade winds now blow more easterly, which could have a long-term impact on rainfall. The trade winds are the primary source of rainfall for the state, Pao-Shin Chu, study co-author and head of the Hawaii State Climate Office, said in a statement. The moisture-laden winds pile up against the islands' volcanoes and drop their burden, producing condensation and rain.

A dramatic reduction in the trade winds could fundamentally change Hawaii's overall climate, Chu said. "We have seen more frequent drought in the Hawaiian Islands over the last 30 years," he said.

According to the National Drought Mitigation Center's State Drought Monitor, nearly 50 percent of land in Hawaii has experienced some degree of drought during the past year.

The researchers plan to use computer simulations to further understand the dynamics of rainfall and trade winds, and estimate future patterns.