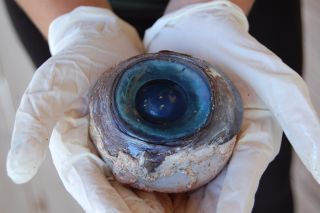 Fish and wildlife officials have pinpointed the likely source of a giant blue eyeball that washed ashore on a Florida beach last week. After examinations, researchers said they believe the mysterious orb was cut from a swordfish and tossed overboard by a fisherman.

"Experts on site and remotely have viewed and analyzed the eye, and based on its color, size and structure, along with the presence of bone around it, we believe the eye came from a swordfish," Joan Herrera, of the Florida Fish and Wildlife Conservation Commission's (FWC) research institute, said in a statement Monday (Oct. 15). "Based on straight-line cuts visible around the eye, we believe it was removed by a fisherman and discarded."

In the Atlantic Ocean swordfish can reach a whopping 1,100 pounds (500 kilograms), and at this time of year it's common for fishers to catch them off the coast of south Florida, according to the FWC. The agency said genetic testing will be done to confirm the identification.

The FWC posted pictures of the softball-size eye last Thursday (Oct. 11) a day after it was found by a man on Pompano Beach, just north of Fort Lauderdale. The eerie photos on Flickr and Facebook prompted wide speculation about the source of the eye. Some had initially suggested it could have been dislodged from a deep-sea squid, but most experts contacted by LiveScience last week leaned toward a swordfish as the most likely explanation.

"You usually don't find random floating eyes of any animal," biologist Sönke Johnsen of Duke University said Friday. Johnsen was cautious about making a judgment based on the photos but said, "I'm fairly sure it's just the eye of a large xiphid, likely a swordfish or marlin."

"They get seriously big, but people don't realize it because most of the eye is inside the head," he wrote in an email to LiveScience.

Squid eyes also can get seriously huge — in fact, they are often much larger than swordfish eyes. Scientists reported earlier this year that the giant squid can have basketball-size peepers, likely as a way to spot predators like sperm whales in their dim undersea homes.