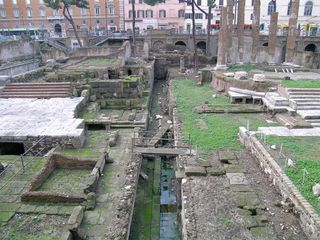 This is the monumental complex in Torre Argentina (Rome), where Julius Caesar was stabbed.
(Image: © Antonio Monterroso/CSIC)

Archaeologists believe they have found the first physical evidence of the spot where Julius Caesar died, according to a new Spanish National Research Council report.

Caesar, the head of the Roman Republic, was stabbed to death by a group of rival Roman senators on March 15, 44 B.C, the Ides of March. The assassination is well-covered in classical texts, but until now, researchers had no archaeological evidence of the place where it happened.

Now, archaeologists have unearthed a concrete structure nearly 10 feet wide and 6.5 feet tall (3 meters by 2 meters) that may have been erected by Caesar's successor to condemn the assassination. The structure is at the base of the Curia, or Theater, of Pompey, the spot where classical writers reported the stabbing took place.

"We always knew that Julius Caesar was killed in the Curia of Pompey on March 15th 44 B.C. because the classical texts pass on so, but so far no material evidence of this fact, so often depicted in historicist painting and cinema, had been recovered," Antonio Monterroso, a researcher at the Spanish National Research Council, said in a statement.

Classical texts also say that years after the assassination, the Curia was closed and turned into a memorial chapel for Caesar. The researchers are studying this building along with another monument in the same complex, the Portico of the Hundred Columns, or Hecatostylon; they are looking for links between the archaeology of the assassination and what has been portrayed in art.

"It is very attractive, in a civic and citizen sense, that thousands of people today take the bus and the tram right next to the place where Julius Caesar was stabbed 2,056 years ago," Monterroso said.

Editor's note: This article has been updated to correct a typo in Julius Caesar's death date.