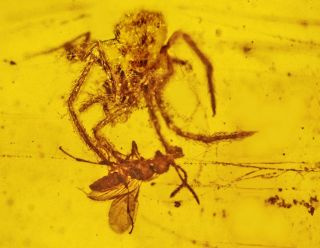 This is the only fossil ever discovered that shows a spider attacking prey in its web. Preserved in amber, it's about 100 million years old.
(Image: © Oregon State University)

Researchers have found trapped in amber a rare dinosaur-age scene of a spider attacking a wasp caught in its web.

The piece of amber, which contains 15 intact strands of spider silk, provides the first fossil evidence of such an assault, the researchers said. It was excavated in a Burmese mine and dates back to the Early Cretaceous, between 97 million and 110 million years ago.

"This juvenile spider was going to make a meal out of a tiny parasitic wasp, but never quite got to it," George Poinar, Jr., a zoology professor at Oregon State University, said in a statement.

"This was a male wasp that suddenly found itself trapped in a spider web. This was the wasp's worst nightmare, and it never ended. The wasp was watching the spider just as it was about to be attacked, when tree resin flowed over and captured both of them."

Poinar and Ron Buckley, an amber collector from Kentucky, described the find in a paper published in the October issue of the journal Historical Biology. They wrote that while there are examples of amber-trapped insects caught in webs, "there is no previous fossil record of a spider attacking its ensnared prey."

The amber chunk also contains the body of another male spider in the same web, which might make the fossil the oldest known evidence of social behavior in spiders, according to the authors.

Both the spider and wasp species are today extinct. But the type of wasp (Cascoscelio incassus) belongs to a group that today is known to parasitize spider eggs, Poinor said. The attack on the wasp by the bristly orb-weaver spider, Geratonephila burmanica, might then be considered revenge.