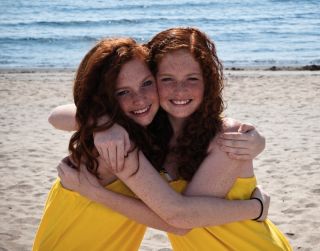 Hate your body? Society's obsession with thinness may not be to blame — at least not entirely. A new study finds that genetics influences how much women buy into the idea that thin equals beautiful.

Identical twins are more likely than fraternal twins to hold similar views on thinness and beauty, according to the new research, published online today (Oct. 3) in the International Journal of Eating Disorders. Because siblings are raised in very similar environments, the difference between fraternal twins, who share about half of their genes, and identical twins, who share all of their genes, suggests a genetic component to what researchers call "thin-ideal internalization."

"Thin-ideal internalization is the extent to which someone identifies with the ideal of thinness and attractiveness in our culture," said study researcher Jessica Suisman, a doctoral student in psychology at Michigan State University. "Someone who has high levels of thin-ideal internalization would say, 'I wish I looked more like the women I see in the media and magazines.'"

The genetics of body hatred

Media and magazines have taken the rap for much of American women's body dissatisfaction. A long list of studies have found that internalization of the Hollywood beauty ideal is linked to eating disorders such as anorexia, bulimia and less-severe food issues such as constant dieting. [10 Odd Facts About the Female Body]

The question, Suisman told LiveScience, is why every woman in America doesn't succumb to this cultural obsession with thinness, given that everyone sees thin-is-best messages on nearly a daily basis. She and her colleagues launched a study to look, for the first time, at genetic influences on these beauty attitudes.

To do so, the researchers used survey responses from a large study of twins in Michigan. A total of 343 female twins ages 12 to 22 filled out surveys, answering questions about how strongly they wanted to look like women they saw on television, in magazines and in advertisements. The more they aspired to those looks, the higher their thin-ideal internalization.

"The identical twins were more similar in their responses to those questions, more similar in their levels of thin-ideal internalization than the fraternal twins," Suisman said. That indicates that all else being equal, genetics play a role in how much women stress about their bodies, perhaps by making some women more sensitive to thinness-promoting environmental cues, Suisman said. In other words, not everyone reacts the same way to a Victoria's Secret ad or an episode of "America's Next Top Model."

The twin-study method can't tell researchers which genes might be responsible for increasing a woman's internalization of the thin ideal, Suisman said. There is almost certainly no straightforward answer, as complex behaviors tend to be influenced by multiple genes. Likely culprits are genes that influence personality, Suisman said, perhaps those that increase perfectionism or the tendency to experience negative emotions.

The next step, Suisman said, is to conduct other twin studies to see how genetics influences the likelihood of developing an actual eating disorder and whether the same factors are at play as in thin-ideal internalization.

The researchers also found that, in twins, shared environmental risk factors — such as being in the same economic class and growing up in the same household — had little influence on thin-ideal internalization. But non-shared factors, including different friend groups or different relationships with parents, explained some of the differences between siblings' attitudes.