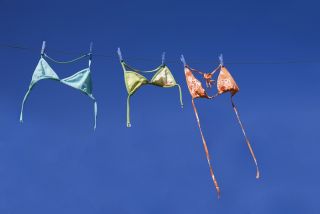 If trying on a bikini under unflattering dressing room lights has ever soured your mood, rest assured you're not alone. A new study finds that, for women, even just imagining trying on swimsuits can increase a bad mood.

Imagining wearing a swimsuit also increases feelings of self-objectification, a term used by psychologists to describe how people, often women and girls, take an outsider's view of their bodies, reducing themselves to objects to be evaluated.

"Self-objectification has a variety of negative consequences ?— always worrying about how you look, shame about the body, and [it] is linked to eating disorders and depression," study researcher Marika Tiggemann, a psychologist at Flinders University in Australia, wrote in an email to LiveScience.

Self-objectification is a personality trait, meaning that some women are more likely to objectify themselves in general than others. But certain situations can also increase feelings of self-objectification, no matter what your starting point. Tiggemann and her colleagues wanted to know what sort of differences clothing made.

"We wear and choose clothes every day," Tiggemann said. "Clothes are controllable aspects of our appearance, in a way that body size and shape are not." [5 Myths About Women's Bodies]

She and her colleagues wrote four scenarios to test the impact of clothing on self-objectification: In one, women were asked to imagine themselves trying on a swimsuit in a dressing room. In another, they imagined wearing a swimsuit while walking down a beach. The other two scenarios had the same settings, but instead of a swimsuit, the women were asked to imagine wearing jeans and a sweater.

One hundred and two female undergraduates read each of these scenarios in random order and participated in the imagination exercise. After each scenario, they filled out questionnaires designed to measure mood, feelings about the body and self-objectification.

Unsurprisingly, imagining wearing a swimsuit made women feel worse about their bodies than did the jeans outfit. Somewhat more surprisingly, it was imagining wearing a swimsuit in a dressing room that made women most likely to self-objectify — not the public scenario in which they might assume other people would judge their bodies. That result emphasizes how much self-objectification is truly an internal process, Tiggemann and her colleagues reported in May in the journal Sex Roles.

"The physical presence of observers is clearly not necessary," they wrote. "More particularly, the dressing room of a clothing store contains a number of potentially objectifying features: (often several) mirrors, bright lighting, and the virtual demand that women engage in close evaluation of their body in evaluating how the clothes appear and fit."

Harmful self-objectification is not easy to prevent, Tiggemann said. Her advice: Avoid mirrors and comparisons with others, and focus on activities that emphasize the function, not the appearance, of the body, such as yoga, sports or sailing.