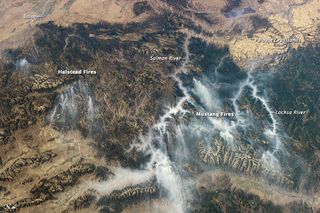 An Expedition 32 astronaut snapped this photographed of wildfire smoke over Idaho from the International Space Station on Sept. 3, 2012.
(Image: © NASA Earth Observatory)

An astronaut aboard the International Space Station snapped this photo showing smoke from several wildfires snaking through Idaho's river valleys on Sept. 3.

Some of the smoke can be seen drifting to the east (note that the image is rotated so that north is to the right), carried by the wind. But much of the haze was trapped closer to the ground when air cooled at night and became denser, confining the smoke to the valleys.

Wildfires have repeatedly reduced air quality throughout the United States since this summer, and winds have blown the smoke to the Atlantic Oceanand beyond.

Forests make up the dark areas of the photograph. The yellow-tan areas at the upper left and upper right of the image are grasslands, including the Palouse Grasslands Ecoregion. Light green areas in many of the valleys are crops, including barley, alfalfa and wheat. The largest single wilderness area in the contiguous United States, the Frank Church-River of No Return Wilderness, occupies the wooded zones of the Salmon River Mountains and Clearwater Mountains — most of the area in the middle of the image.

It's been a bad year for wildfires, partially due to the intense drought gripping much of the country, which turns plants into tinder. If current rates continue, wildfires will burn more acres in 2012 than in any year since records began being kept in 1960, according to NASA.

Wildfires raged in Colorado and throughout the Southwest earlier this summer, before the flames shifted west and north.

As of today (Oct. 1), there are five large wildfires in Idaho. Nationwide, there are 13 large fires in five states, according to the National Interagency Fire Center. Altogether the blazes have charred 13,754 square miles (35,620 square km), an area larger than Maryland. That's above the 10-year average for this date, which is 10,630 square miles (27,530 square km).