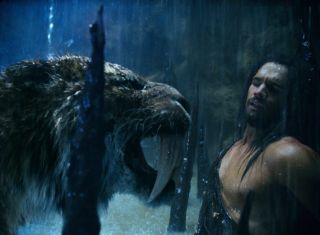 In the film "10,000 BC," which opens March 7, a band of hunters venture on an epic quest, overcoming prehistoric monsters to end up at a land of gods and pyramids.

The fantastic creatures depicted in the movie — from the giant carnivorous birds to saber-toothed cats and woolly mammoths — actually once existed. Whether they could have existed at 10,000 BC as shown is another story, although the ancient Egyptians might well have known of woolly mammoths.

Here's a look at the movie's beasts from a scientific perspective.

The most famous of the saber-toothed cats was Smilodon, a group of predators often dubbed saber-toothed tigers, although they were not actually close relatives of the modern tiger. Ironically, Smilodon was recently found to have had a relatively weak bite.

However, Smilodon lived solely in the Americas, while the movie "10,000 BC" apparently takes place in the Old World. Still, other prehistoric felines were armed with deadly, extraordinarily long canines. These included the "scimitar cat" Homotherium, a lion-sized cat that lived in both the New and Old Worlds.

Scimitar cats are thought to have died out in the Old World some 100,000 years ago before the beginning of the last Ice Age, but now there is some evidence they may actually have held out in Europe and possibly Africa "until maybe 30,000 or 40,000 years ago, and maybe a bit later," said Ross MacPhee, curator of mammalogy at the American Museum of Natural History in New York, who did not consult for the film.

The predators in the film "10,000 BC" are "significantly larger than Smilodon or Homotherium were in life," MacPhee noted. "What you see in the film seems to be at least twice the body length of a modern tiger, which is a very large beast indeed."

Incidentally, a number of other animals with extraordinary canines existed, including a marsupial, Thylacosmilus, and a bobcat-sized carnivore dubbed Hoplophoneus.

The very name of these predators evokes menace — "terror birds." These giant, flightless carnivorous birds — the largest birds the world has ever seen — stood up to 10 feet high and could be armed with vicious beaks a half-yard long.

Still, terror birds are known mostly from the Americas. A terror-bird-like-thing is known from Germany, but "it lived more than 40 million years ago," MacPhee said. "There's nothing like it in recent times from the Old World."

Mammoths began disappearing about 10,000 years ago, with the last dwelling on islands in the Arctic until 3,000 to 4,000 years ago.

Woolly mammoths were actually smaller than often popularly depicted. "They were just 10 feet at the shoulder, maximum height," MacPhee said. "What makes them look so huge are their heads. They had large heads, and had larger tusks than modern elephants, but their bodies were relatively diminutive."

Intriguingly, in 1994, a scientist in Israel revealed the ancient Egyptians may have known of woolly mammoths, with a wall painting of what might be a waist-sized mammoth found in a pharaoh's tomb.

"There's clearly no physical evidence of mammoths from the Nile Valley," MacPhee said. "Still, what they might actually have known about mammoths remains an outstanding mystery."