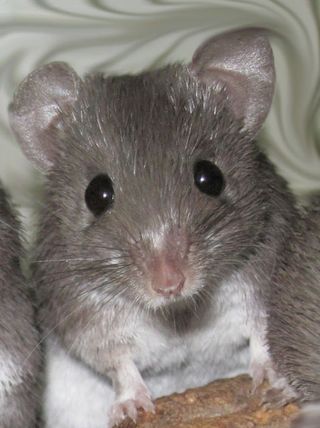 The African spiny mouse (Acomys percivali) can regenerate skin when wounded and even regrow ears that had been punctured.
(Image: © Ashley W. Seifert )

A mouse that escapes predators by shedding patches of its skin may shed light on regeneration and could lead to research that one day helps people heal from wounds and disease, scientists say.

Humans and other mammals are generally very limited when it comes to regeneration, but one mammal, the African spiny mouse, can heal wounds much faster than lab mice can, which drew the attention of Ashley Seifert, a regeneration biologist at the University of Florida at Gainesville.

"Mammals have no problem regenerating blood cells or epidermis, or regrowing hair that is plucked out," Seifert said, "but following injury, like the severing of a finger, mammals generally just seal off the wound site and produce scar tissue.

"Compare that to salamanders, who can regenerate entire pieces of tissue on the sides of their bodies, not to mention arms, legs and their brain," Seifert told LiveScience.

Furthermore, in mammals, "in general, the ability to regenerate also declines with age," Seifert said. "Newborn humans can actually regenerate a very small piece of the fingertip, but this ability is lost during childhood development."

Given the general limits of mammals when it comes to regeneration, Seifert was fascinated by tales of the African spiny mouse. While vigorous movement could peel off up to 60 percent of the skin off the backs of these rodents, they could quickly heal these wounds and regrow spiny hairs that covered the lost skin. [10 Amazing Animal Abilities]

Seifert clarified these rodents do not regrow all their lost skin. "They use contraction to constrict the wound site so they don't actually have to regenerate much tissue at all," he explained. "It is the central portion of this wound, the remaining 5 percent, that they regenerate."

To learn more about how these rodents accomplish such regeneration, Seifert and his colleagues investigated live specimens of two species of African spiny mouse (Acomys kempi and Acomys percivali) captured over the course of three years from rocky outcroppings in central Kenya.

Analysis of spiny mouse skin revealed it was 20 times weaker than the skin of lab mice, requiring 77 times less energy to tear. This breakaway skin likely helps spiny mice escape the clutches of predators such as snakes, owls and eagles, Seifert said.

When the researchers cut small wounds in the skin of these rodents, new layers of tissue that would later go on to become skin grew quickly over the injured areas, covering wounds 0.2 inches (4 millimeters) across after three days, compared with the five to seven days it took lab mice to do the same. Damaged ears with holes punched in them even regenerated hair follicles and cartilage without scarring.

"The fact that these mice can regenerate such large ear holes — 4 millimeters — is surprising to me," Seifert said.

Healing wounds in spiny mice apparently deposit collagen fibers that form scars far more slowly and in lower abundances than in lab mice. Wounded ears also grew masses of cells similar to blastemas, transient structures used by animals such as salamander to rebuild missing tissues. "It is thought that one of the main constraints on regenerating appendages in humans ― or other mammals, for that fact ―is the failure to form a blastema," Seifert said.

These findings suggest that mammals might retain a higher capacity for regeneration than is believed. Seifert now wants to figure out what molecular mechanisms these spiny mice use to instruct blastema-like structures to form.

The scientists detailed their findings in the Sept. 27 issue of the journal Nature.