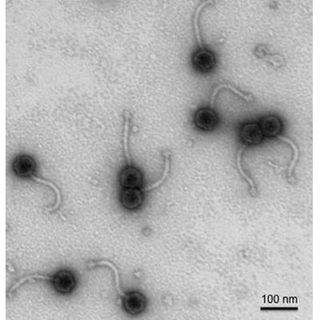 A new way to clear up your skin may be virus particles that munch on acne-causing bacteria. (Anti-acne virus shown here under an electron microscope.)
(Image: © University of Pittsburgh)

The cure to your acne problem might be right under your nose … or, in fact, on any part of your face. Scientists have found that common, benign viruses living on your skin could be natural and effective killers of the bacteria that cause the most common kind of acne.

These viruses are a type called bacteriophages, meaning they feed only on bacteria and not on human cells, unlike viruses such as HIV or poliovirus.

Because certain bacteriophages naturally seek out the very bacteria that cause acne — and live in the same environment, co-evolving with them — they could be better at controlling acne than the foreign concoctions now in use.

After conducting a genetic analysis of these phages, known for decades, scientists at the University of California, Los Angeles, and at the University of Pittsburgh suspect that new acne medicines can be made from them. They report their findings today (Sept. 25) in the online edition of the journal mBio, published by the American Society for Microbiology.

A pimple is born

While many factors can lead to an outbreak of common acne, known medically as acne vulgaris, the underlying cause is the bacterium Propionibacterium acnes, which covers human skin. Sudden growth of these bacteria can alarm the immune system and cause inflammation, resulting in pimples. [Does Chocolate Cause Acne & Other Old Wives' Tales]

Acne is most common during adolescence because, in part, the natural surge of sex hormones can cause hair follicle glands to grow larger and make more sebum, an oily substance that lubricates the skin. The P. acnes live primarily on the fatty acids of the sebum. More sebum means more P. acnes.

Treatment is based on the various factors at play: cleaning pores of sebum so as to remove the bacteria's food source; antibiotics to kill bacteria; anti-inflammatory medicine to reduce swelling; or hormonal treatment, particularly for adults suffering from hormonal imbalances.

Yet each approach has its limitations. For example, antibiotics ultimately can fail because the P. acnes can develop natural resistance. And many acne medicines have adverse side effects.

Using bacteriophages to kill the bacteria could be a more efficient approach because they are a natural predator, unlike a synthetic antibiotic.

However, what is most surprising — and, most promising — is the researchers' discovery that the P. acnes phages have simple and nearly identical genomes, likely the result of their unique and restricted habitat, said senior author Robert Modlin of the David Geffen School of Medicine at UCLA.

"This is in striking contrast to every other studied phage system," Modlin told LiveScience. "This implies a unique relationship between these phage and the bacteria."

Other families of bacteriophages, such as the ones that kill the bacteria that cause tuberculosis, have diverse genomes among them. Thus, it is harder to decipher which proteins encoded from the genome are involved in killing the bacteria. [5 Wacky Things That Are Good for Your Health]

"The limited diversity of these P. acnes phages and knowing which types of [bacterial] strains they infect provides important fundamental information for thinking about how they can be exploited for control of acne," said co-author Graham Hatfull of the University of Pittsburgh.

The punch line is that these phages can be single-focused killers. So, they might be used directly as a medicine. Or, as in the case of herbs of therapeutic value, doctors could isolate the potent elements of the phage. Only testing can reveal the right balance of viral-based medication for the immune system to handle, the researchers said.

Medicine in the making

Whole phages kill P. acnes in the laboratory, the researchers found. Now, they plan to isolate the active protein from the P. acnes phage and test whether it is as effective as the whole virus.

If this laboratory testing proves successful, the researchers hope to study the compound's safety and effectiveness in combating acne in people. There has been no significant acne medication developed for years, said the study's first author, Laura Marinelli, a UCLA postdoctoral researcher in Modlin's laboratory.

Marinelli added that several of the 14 researchers on the mBio paper have a vested interest in this topic, having children with acne or about to enter their adolescent years.

"People are affected by acne during a time in their life when their self-esteem is most fragile and they are most vulnerable to criticism by their peers," said Marinelli. "It would be incredibly rewarding and meaningful to me to be able to contribute to the development [of] treatment that could help kids suffering from acne."

Aside from its emotional toll, severe acne can cause scarring and more serious infections.