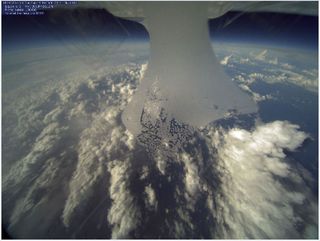 A sky-scape of clouds snapped from the belly of NASA's hurricane-hunting drone, a Global Hawk aircraft, on Sept. 11, 2012.
(Image: © NASA.)

This year, storms over the Atlantic have gotten some extra company — and lots of extra scrutiny — thanks to a new NASA research project that sends unmanned drones high above tropical storms and hurricanes for hours at a time.

Dubbed the Hurricane and Severe Storm Sentinel project, or HS3, the mission uses Global Hawk aircraft outfitted with specialized instruments to collect reams of data on the storms, in hopes of discovering what factors determine a storm's temperament.

"We're trying to better understand what leads to intensification of the stronger storms versus the ones that fail to intensify, and trying to look at how much of that is driven by the large-scale environment, and how much is driven by what's happening in the storm itself," said Scott Braun, a NASA research meteorologist and HS3's lead mission scientist.

So far, a single Global Hawk, a windowless drone capable of flying for up to 30 hours at a time, has flown five flights into storms, Braun told OurAmazingPlanet. Four of those expeditions targeted Tropical Storm Nadine — a tenacious storm that has refused to dissipate despite adverse conditions. The most recent flight was conducted over the weekend of Sept. 21-22.

Eyes in the sky

Although the project was given access to two Global Hawks, each outfitted with instruments designed to examine differing aspects of a storm — its surrounding environment and its inner workings — one of the planes isn't yet ready for meteorology research. High demand for the high-performance aircraft among government agencies prevented NASA from fitting one of the Global Hawks with its specialized instruments on time, but both aircraft will presumably be available to the researchers in 2013, Braun said.

The Global Hawk in working research mode flies out of NASA's Wallops Flight Facility in Virginia, and must take off and land during daylight hours; a smaller, manned aircraft escorts the drone out of and back into American air space. In the dark, the pilots in the so-called chase plane have a hard time spotting their quarry.

The drone flights typically last about 26 hours, Braun said. Takeoff and touchdown are controlled from Wallops, but once a Global Hawk travels out over the ocean, control is handed over to pilots at NASA's Dryden Flight Center in California's Mojave Desert.

Once it reaches a storm, the Global Hawk spends some 18 to 20 hours flying what Braun calls "a lawnmower pattern," soaring back and forth at altitudes of up to 65,000 feet (19,800 meters).

Two instruments aboard the plane spy on the storm from above, collecting data on temperature, moisture and the properties of the clouds. [50 Amazing Hurricane Facts]

A third tool sends dozens of instruments equipped with tiny parachutes hurtling down through the storm. Called dropsondes, the instruments take snapshots of existing conditions — temperature, relative humidity, pressure, wind speed and direction — about 10 times per second before they crash-land into the ocean. On a typical flight, a Global Hawk releases more than 60 dropsondes into a storm.

The hours-long flights are aimed, in part, at deciphering one of the biggest mysteries in hurricane research: the role of the Saharan air layer, "that hot, dry, dusty air mass that comes off the Sahara," as Braun put it.

There's a dearth of direct observational data, and some studies suggest the desert air can fuel a storm, while others suggest the dry air can tamp down a burgeoning storm's fury.

"We're trying to figure out if it's more of a positive or negative influence on storm development," Braun said.

Overall, the mission, which will conduct flights for about a month per year through 2014, is aimed at improving hurricane forecasts. Researchers have gotten very good at figuring out where a hurricane is headed, but a precise understanding of what storms will look like when they get there remains elusive.

Aside from tireless Nadine, the Atlantic basin is now empty. And unless another storm appears soon, the HS3 team may not get another research subject before their 2012 field campaign ends. This year's mission is scheduled to wrap up on Oct. 5; it can extend to Oct. 12 at the very latest.