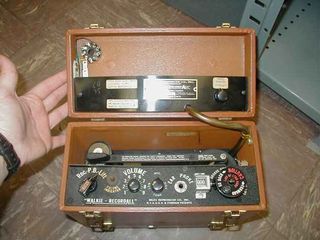 The Walkie RecordAll. A sonoband slips on to the spools and a needle etches the recordings on the band.
(Image: © Field Museum)

Sooner or later there won't be any cassette tape players or VHS players around. Lots of your old music and movies will sit worthless on a shelf, joining your LP records and 8-tracks if you bothered to save them.

Imagine the plight of the Field Museum, which had 100 hours of important interviews from 1958 recorded on a Walkie RecordAll. The interviews, with Captain A.W.F. Fuller, held comprehensive information about more than 6,000 artifacts Fuller had been collected in first half of the 1900s -- masks, skulls, weapons, idols and tools from the Pacific.

The museum asked the Cutting Corporation, which specializes in bringing old recordings to modern formats, to convert the tapes to digital. But the company didn't have a Walkie RecordAll sitting around.

The bulky device was commonly used in the legal profession half a century ago. It etched sounds onto a tape called a sonoband.

Yesterday, the museum announced that the obstacles had been overcome.

"When these workaday recordings were made almost half a century ago, they were seen as little more than verbal notes on what we were getting from Captain Fuller," said John Edward Terrell, a curator of Pacific anthropology at the Field Museum. "Today, however, these recordings add depth and nuance to his fantastic collection. If we didn't digitize them while the sonobands are still playable, these voices from the past would be lost forever."

Fuller was a collector of collections. He had stuff originally collected by 18th century British explorer Captain James Cook. Fuller sought items that had been made before native people were influenced by Westerners. Pieces come from Hawaii, Fiji, New Guinea, Tahiti, Australia and elsewhere.

Here's a snippet from the tape:

"Bushmen's belt obtained at Auki Malaita Island. Mr. Holmes' party went up the river in their launch to obtain fresh water when they were surprised by a party of Bushmen fully armed and apparently on a raiding expedition as they were so close to the coast. The launch beat a retreat down the river, the natives following on the banks, when near the mouth, and in safety, Mr. Holmes went close to the natives in a small boat while being covered by the guns in the launch and obtained this belt from one of them, it being the only thing the man had on."