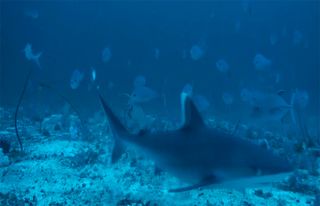 A silvertip shark lingers near a baited video camera on a seamount near the Chagos Archipelago.
(Image: © © University of Western Australia.)

A recent expedition to an isolated archipelago in the middle of the Indian Ocean came back with footage of thriving sea life swarming the slopes of a newfound seafloor mountain.

Videos captured by baited cameras revealed a rich underwater community of hammerhead sharks, silvertip sharks, large groupers, rays and a variety of other fish near the Chagos Archipelago, a string of 55 islands designated as a marine protected area by the British government in 2010.

Some have expressed concern over the newly established protections, because it appears they may be interfering with the efforts of local people to return to islands from which they were evicted in the mid-20th century. However, many have heralded the creation of the vast marine reserve.

Much of the riot of undersea life was congregated around a seafloor mountain, or seamount, a dramatic feature more than a mile in diameter that rises far above the ocean floor. Finding these geological features, which provide welcome habitat for sea creatures in the open ocean, is a huge challenge.

"There was a serious 'aha' moment," said Jessica Meeuwig, a professor at the University of Western Australia. Meeuwig, along with colleagues from the Zoological Society of London and Warwick University, were exploring an area that is poorly documented.

The first spot they visited — an area chart suggested it was home to a seamount — proved a disappointment. There was nothing there.

"Then, in crisscrossing the next location, sure enough — a seamount came rising out of the depths," Meeuwig told OurAmazingPlanet in an email.

Although Meeuwig qualified the find as more of a confirmation of the seamount's existence, rather than an outright discovery, she said it was incredibly exciting nonetheless. Because seamounts attract such a large variety of sea life, they are often the target of large-scale fishing operations. This seamount appears to be untouched by trawlers.

Meeuwig said she was surprised by the sheer diversity and abundance of the sea life living near it, and by the large size of the creatures themselves. "Such big fish," she said.

The team dubbed the seamount Sandes Seamount in honor of Neil Sandes, captain of their research vessel, who took great pains to explore the region in intimate detail.

"Oceans are really hard to study because we can't see easily below the water's surface," Meeuwig said. "So managing to pinpoint a proverbial needle in the haystack and documenting its marine biodiversity was very cool."