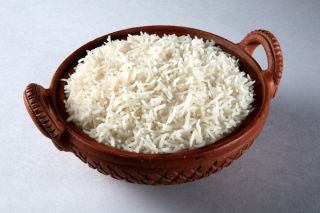 Two reports are out today announcing concerns over the levels of arsenic found in rice.

The Food and Drug Administration released the early results of an investigation of arsenic levels in rice, including measurements of 200 products. The agency will test 1,000 more products yet this year, and study the effects of arsenic.

Here are five things you should know about arsenic:

1. What is arsenic, and what does it do to the human body?

Arsenic is an element found in nature, and in man-made products, including some pesticides. Low levels of arsenic are found in soil, water and air. The element is taken up by plants as they grow — this means arsenic makes its way into our food.

Most people's largest source of arsenic is food, according to information from the Virginia Department of Public Health.

Long-term exposure to low doses of arsenic may change the way cells communicate, and reduce their ability to function, according to researchers at Dartmouth University. It could play a role in the development of diabetes, cancer, vascular disease and lung disease.

The Food and Drug Administration says that long-term exposure to high levels of arsenic is associated with higher rates of skin cancer, bladder cancer and lung cancer, as well as heart disease.

Arsenic does not build up in the body, according to Dartmouth. It can leave the system in a day or two, once consumption stops.

2. How much arsenic is present in our drinking water and food?

The Environmental Protection Agency limits the amount of arsenic in U.S. public drinking water to 10 parts per billion (ppb). Water that comes from privately owned wells may contain higher levels of arsenic, especially in areas where the groundwater flows over arsenic-rich bedrock, according to Dartmouth University.

No federal limit has been set for the amount of arsenic in foods.

Arsenic may found in grains, fruits and vegetables according to the FDA.

Rice is different than other grains — it takes up arsenic more readily from the environment, according to the FDA.

Some seafood also has high levels of the less-toxic form of arsenic (organic arsenic), the FDA says.

According to Consumer Reports, a 2010 study from the EPA said that vegetables account for the biggest dietary exposure to arsenic, accounting for 24 percent of intake. Fruits and fruit juices follow, with 18 percent, and rice accounts for 17 percent.

Atoms of arsenic bond with other elements to form molecules — if carbon is one of these elements, then the arsenic compound is an organic compound. If there is no carbon present, then the arsenic compound is in an inorganic compound. (When the term "organic" is used in this way, it refers to the chemical elements present, and differs completely from the "organic" label that is applied to some foods. Both organic and conventionally-grown foods may contain arsenic, according to the FDA. )

Inorganic arsenic is a known human carcinogen — it is this form of arsenic that is linked with increased risks of cancer and other health effects.

4. Do we know that the arsenic in rice is harmful?

No. "It is critical to not get ahead of the science," Michael Taylor, the FDA deputy commissioner for foods, said in a statement. "The FDA's ongoing data collection and other assessments will give us a solid scientific basis for determining what action levels and/or other steps are needed to reduce exposure to arsenic in rice and rice products."

The FDA is not currently recommending that consumers change their consumption of rice or rice products; however, the agency does say that people should eat a balanced diet containing a wide variety of grains.

Consumer Reports also recommends that people eat a varied diet, and experiment with other grains.

"Vary your grains, especially if you eat more than two or three servings of rice per week," the organization recommends, noting that wheat and oats tend to have lower levels than rice.

Pass it on: If you eat a lot of rice, it may be a good idea to vary the grains in your diet.