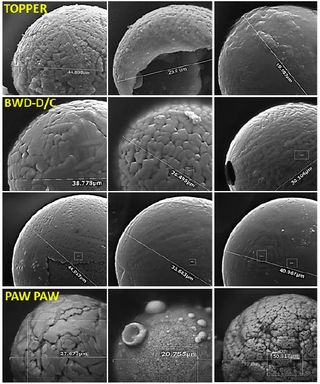 Spherules from archaeological sites in the study. The microscopic particles have marred surface patterns from being crystallized in a molten state and then rapidly cooled.
(Image: © University of South Carolina)

A space rock crashed into Earth about 12,900 years ago, wiping out some of North America's biggest beasts and ushering in a period of extreme cooling, researchers say, based on new evidence supporting this comet-crash scenario.

If such an impact took place, it did not leave behind any obvious clues like a crater. But microscopic melted rock formations called spherules and nano-size diamonds in ancient soil layers could be telltale signs of a big collision. The mix of particles could only have formed under extreme temperatures, created by a comet or asteroid impact.

Researchers first reported in 2007 that these particles were found at several archaeological sites in layers of sediment 12,900 years old. Now an independent study published in the Sept.17 issue of the Proceedings of the National Academy of Sciences (PNAS) says those findings hold up.

A team led by Malcolm LeCompte, of Elizabeth City State University in North Carolina, studied sediment samples from three sites in the Unites States: Blackwater Draw in New Mexico, Topper in South Carolina, and Paw Paw Cove in Maryland. The researchers said they found the same microscopic spherules in some of the same ancient layers as were found in the 2007 study.

A comet crash in the ice fields of eastern Canada could explain the region's die-off during the late Pleistocene epoch. While the cause of the catastrophic extinction event has been debated, researchers say it killed off three-fourths of North America's large ice-age animals, such as saber-toothed tigers and woolly mammoths, and the Clovis people, a Stone Age group that had only recently immigrated to the continent. [Album: 25 Amazing Ancient Beasts]

In the PNAS study, researchers tested levels of Clovis artifacts at Topper for the microscopic soil clues. The Clovis are known for their large, fluted spear points that they likely used to hunt large animals and which were first found near Clovis, N.M.

"If debris was raining down from the atmosphere, the artifacts should have acted as a shield preventing spherules from accumulating in the layer underneath," University of South Carolina archaeologist Albert Goodyear said in a statement. "It turns out it really worked! There were up to 30 times more spherules at and just above the Clovis surface than beneath the artifacts."

There is debate over whether a comet impact actually wiped out the Clovis, with a study detailed in 2010 in the journal Current Anthropology, suggesting the Clovis' nomadic lifestyle, and not a demise, could explain gaps in their occupation of sites.

An impact also would explain what set off the Younger Dryas period or "Big Freeze," a 1,300-year era of glacial conditions that has been well documented in ocean cores and ancient soil samples. A comet would have produced enormous fires that melted large chunks of the North American ice sheet, sending cold water into the world's oceans and disrupting the circulation of currents responsible for global heat transport, the researchers noted.