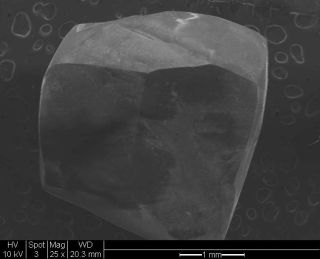 Caption: An Indiana diamond found in deposits that date to the end of the last Ice Age. Tests reveal it originated from the Canadian Shield.
(Image: © Ken Tankersley)

Diamonds and precious metals found in the eastern United States might have rained down during the last Ice Age after a comet shattered over Canada and set North America ablaze, all leading to a mass die-off of animals and humans.

New chemical analyses of diamond, gold and silver found in Ohio and Indiana reveal the minerals were transported there from Canada several thousand years ago. The question is, how?

"There are no gold mines or silver mines in Ohio that anyone knows of, but there are plenty of them in Canada," said retired geophysicist Allen West, who was involved in the study.

The discovery is consistent with a theory proposed by West and colleagues that a 3-mile-wide comet splintered over glaciers and ice sheets in eastern Canada about 12,900 years ago and wiped out man and beast.

"These would have been like ten thousand Tunguskas going off at once," said West, referring to a mid-air explosion over Siberia a century ago possibly caused by a fragmenting meteor.

The diamonds, gold and silver could have been ejected into the air during the blasts, West said, or they could have been carried south by rivers formed from the meltwater of liquified glaciers.

For several months following the comet strike, the skies rained precious stone and metals, the researchers speculate. Diamonds drizzled down by the tons.

"Some of them you couldn't see, and animals would've been breathing them in," West told LiveScience. "But other ones would clearly have been visible. They might've even hurt if they hit you."

The larger diamonds were visible to the naked eye and dropped like hail stones within seconds of the blasts, West said.

The smallest diamonds, the "size of cold viruses," would have lingered in the atmosphere for weeks or months, eventually wafting down to Earth like expensive snowflakes.

Flaming fragments of the comet crashing to Earth sparked forests fires around the globe, West contends. The intense heat from the blasts set the very air on fire. North America's grassland, the furs of animals, the hair and clothing of humans — all would have been set ablaze.

West and his colleagues have proposed that the comet strike contributed to the extinction of several species of North American megafauna, including mammoths and mastodons, and led to the early demise of the Clovis culture, a Stone Age people who had only recently immigrated to the continent.

The multiple airbursts might have also caused large amounts of fresh water to be dumped into the Atlantic Ocean, temporarily disrupting currents and prompting a sudden global cold snap called the Younger Dryas period.

"The kind of evidence we are finding does suggest that climate change at the end of the last Ice Age was the result of a catastrophic event," said study team member Ken Tankersley, an anthropologist at the University of Cincinnati.

While the discoveries in Ohio and Indiana are consistent with the theory of a comet colliding with Earth during the last Ice Age, West cautions that it is not a "smoking gun."

"We're a long way from saying categorically that these things got here because of this event," West said. "They're consistent, but we've got a lot more work to do to show there's a direct connection."

The researchers are preparing to submit their research to a scientific journal.