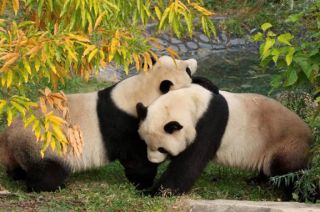 The Smithsonian National Zoo in Washington, D.C., has some exciting news: Its female giant panda, Mei Xiang, has given birth to a cub.

Zookepers have not been able to get up close to the newborn, but based on Mei Xiang's behavior and the sounds observed in webcam footage, they believe the baby was born at about 10:46 p.m. ET on Sunday (Sept. 16).

"She is cradling her cub closely, and she looks so tired, but every time she tries to lay down, the cub squawks and she sits right up and cradles the cub more closely," the zoo's chief veterinarian Suzan Murray said in a statement. "She is the poster child for a perfect panda mom."

The zookeepers are staying at a safe distance from the mom and baby, because they want Mei Xiang to raise her cub naturally. It could be a few weeks before the 14-year-old female leaves her baby alone long enough for the zoo's veterinary team to give the furball a brief checkup and determine its sex. The cub's birth comes seven years after Tai Shan, the zoo's only prior cub, was born to Mei Xiang in 2005. He was moved to China in 2010. [Fun Facts About Giant Pandas]

It's difficult to breed pandas in captivity. Females are fertile just one or two days a year, and attempts to coax a panda pair to mate naturally during that short window often fail. Moreover, it's tough to know the success of artificial insemination until a cub appears. Female pandas almost always undergo a false pregnancy after they ovulate, but don't conceive; the pseudo pregnancy mimics the real thing, as the pandas sleep a lot, make bamboo nests and show a spike in hormone levels.

Mei Xiang had been artificially inseminated on April 29 and 30 with sperm from the zoo's adult male, Tian Tian. The panda parents are on loan to the United States from China until 2015. As only 1,600 giant pandas are left in the wild, captive breeding is an important way for scientists to study and conserve the endangered species.

Across the country, the San Diego Zoo also welcomed a new panda cub this year. The baby boy was the sixth cub born to the zoo's female Bai Yun and zookeepers have reported that he is healthy and just started opening his eyes.