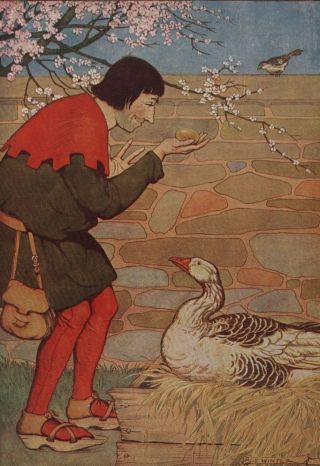 The Golden Goose Awards, in part, allude to the fable "The Goose That Laid Golden Eggs."
(Image: © Public Domain)

"We've all seen reports that ridicule odd-sounding research projects as examples of government waste," said Rep. Jim Cooper (D-Tenn.), who had the original idea for the award. "The Golden Goose Award does the opposite. It recognizes that a valuable federally funded research project may sound funny, but its purpose is no laughing matter." Cooper originally came up with the idea to educate the public and Congress on the value of federally funded basic scientific research.

The award's name alludes to the Aesop fable "The Goose That Laid the Golden Eggs," and is also a play on the "Golden Fleece Award," bestowed by the late Sen. William Proxmire (D-Wis.), on research he considered wasteful spending. Rather than "wasteful," Golden Goose Awards will honor those obscure studies that have led to major breakthroughs that have had a significant, and often serendipitous, impact on humans and the economy.

As such, the nominees' research must already have led to these significant benefits; the awards aren't intended to honor current research that may lead to future breakthroughs.

One Golden Egg Award went to a team of four scientists from different fields who came up with an ideal bone-graft material from a coral discovered in the South Pacific Ocean. In the early 1970s, three Penn State scientists, Rodney White, Della Roy, and the late Jon Weber, along with scientist Eugene White, discovered the coral had the same porous, mazelike microstructure as human bone, a structure that may foster natural tissue growth on its branches.

The team used the coral's structure as a model for creating a ceramic prosthetic with intricate porosity rivaling human bone. They also used a pressure-cooking technique to give the actual coral chemical and mechanical properties of human bone; the resulting structures, which could be used as hardware for low-stress bone and joint repairs, would likely eliminate any chances of rejection by the body. Funding for the project came from the National Institutes of Health (NIH).

The discovery of a jellyfish protein that glows light green in daylight and fluorescent green under ultraviolet light has led to a trove of medical advances — and a Golden Goose Award. Turns out, the green-glowing jellyfish protein, called GFP, can be connected to gene switches or genes, allowing scientists to observe chemical reactions happening inside cells. The trio of scientistsresponsible for the protein isolation and following GFP discoveries is made up of Osamu Shimomura, Martin Chalfie and Roger Tsien. The work was funded by the National Science Foundation (NSF) and NIH. [10 Wackiest Animal Discoveries]

A project considered frivolous — to the point where then Columbia University professor Charles Townes' colleagues told him they thought it was a waste of the university's money — led the way to the invention of the laser. In 1953, after work trying to generate a stream of microwaves through contact with an "energized" electron, Townes, James Gordon and H.J. Zeiger built the first maser (microwave amplification by stimulated emission of radiation). Further work laid the groundwork for the development of lasers and ultimately the basis of countless technologies, including digital media, CDs, satellite broadcasting, laser eye surgery and other innovations. (The NSF and U.S. Navy funded Townes' research.)

The Golden Goose Awards will be announced three to four times a year, with an annual awards event held in Washington, D.C.