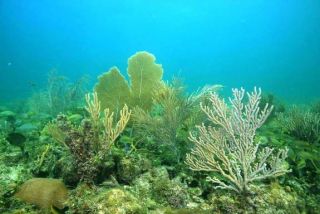 Researchers are hoping to unlock the secrets of corals that can withstand warm waters whose temperatures would kill most other corals.
(Image: © Elizabeth Crook)

Corals living in the tropical paradise off the Ofu Island in the South Pacific Ocean may be some of the strongest corals, living in lagoons with water temperatures high enough to kill most of their brethren.

They are not just surviving, but these coral reefs are thriving, according to a marine biologist who is trying to find out just how they do it, during an expedition running from March 18 through April 7.

"In fact, they're growing faster than the same species elsewhere," said Stephen Palumbi of Stanford University.

Studying these seemingly heat-resistant corals could help scientists find ways to protect these and other corals, which scientists worry are at risk as climate change warms the oceans.

Coral reefs are a crucial part of the environment; they support more species per unit area than any other marine habitat. They are home to many fish we eat; they attract divers; buffer coasts from the effects of storms; and have been the source of medicinal substances, according to the National Oceanic and Atmospheric Administration.

"Our research tries to find the corals that are better at resisting the negative effects of high temperature, and find out at the molecular genetic level how they accomplish this," Palumbi said in a statement put out by the university.

To test the corals' strength, the researchers will use a computer-controlled aquarium that lets them increase water temperature to a precise degree. They will place the corals from different locations into this so-called coral stress tank, ramp up the temperature over the course of a day and monitor which of the corals survive and which bleach and die. Bleaching refers to the whitening of corals that occurs when they eject their symbiotic, and photosynthesizing, algae that live within their tissues. It generally is a sign of stress.

The first part of the team's expedition takes place in Ofu Island in American Samoa; from there, they will travel to Rarotonga and Aitutaki in the Cook Islands in the South Pacific Ocean.

"We do not know if the strong corals we find tomorrow will be dead the next day," Palumbi said. "But if we do not find them, we will never know where to protect them."

Stay updated on the team's whereabouts and findings on their blog.