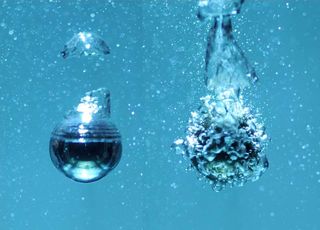 A tiny, heated steel sphere covered in the new coating, so as it cools there is a continuous film of vapor without bubbling. Without the coating (right) the cooling of the heated rod leads to conventional bubbly boiling.
(Image: © Dr. Ivan Vakarelski )

A new nanomaterial vanquishes the bubbles that normally pop up with boiling, a finding that may point to ways to help prevent explosions in nuclear power plants, researchers say.

To understand how this material works, imagine a hot skillet. When its surface is warm, water on it will bubble. However, once the skillet gets hot enough, the water drops will skitter across its surface as they levitate on a cushion of vapor, an effect known as the Leidenfrost regime after the scientist who investigated it in 1756.

"The Leidenfrost state of a water drop is often used worldwide to gauge the temperature of a hot skillet while cooking," researcher Neelesh Patankar, a mechanical engineer at Northwestern University in Evanston, Ill., told LiveScience.

Tinkering with a surface's properties can alter the temperature at which water touching it goes from this explosive bubbling phase to the Leidenfrost regime. Making a surface hydrophobic, or water-repellant, affects how well heat gets transferred from that surface to water. Making it craggy instead of smooth also controls how heat flows from it. [Top 10 Greatest Explosions]

Scientists developed a craggy super-water-repellant coating made of nanoparticles covered with an organic, hydrophobic compound. (Nanoparticles are particles only nanometers, or billionths of a meter, in size.)

When a steel rod covered with this coating was heated, the result was a continuous film of vapor on the rod without bubbling. "One can make surfaces on which a liquid will never bubble as it starts boiling, a phenomenon that is contrary to the experience of anyone who has ever cooked," researcher Ivan Vakarelski, a physicist at King Abdullah University of Science and Technology in Saudi Arabia, told LiveScience. [See Video of the No-Bubble Boil]

Suppressing the bubbling could help reduce the damage such fizzing has on surfaces. It might also prevent vapor buildup that can lead to explosions, which can be disastrous in the case of nuclear power plants — witness the infamous 1986 Chernobyl disaster in the former Soviet Union, the worst nuclear accident in history.

"In nuclear power plant accidents, powerful vapor explosions can occur when melted fuel is in contact with the coolant liquid," Vakarelski said. When that happens, a vapor film of the coolant liquid is formed next to the molten fuel. As the material cools, the vapor film enters a "bubbly boiling regime," Vakarelski said. "This leads to vapor explosions. It is suggested that such an explosion destroyed the reactor in the case of the Chernobyl accident.

"Our work does show how to stop a vapor film from collapsing to a bubbly boiling phase," Vakarelski said. "As such, the phenomenon we report is the same as that in vapor explosions in nuclear power plants."

However, it seems unlikely that this particular coating will improve nuclear safety, researchers cautioned.

"First, we need a surface with the right kind of texture to eliminate vapor film collapse — it is unclear how this can be done on a molten metal, the fuel," Patankar said. "Second, even if self-assembling nanoparticulates are injected with the coolant to reside on the surface of the molten metal — we don't even know if this can be done — the nuclear reactors operate at much higher temperatures, much beyond the operating conditions of the coating used in our study."

Instead, the researchers suggest future work along similar lines might control how matter behaves in other ways, such as reducing drag on surfaces, preventing the formation of frost or ice, and efficiently transferring heat via boiling and condensation.

The scientists detailed their findings online today (Sept. 12) in the journal Nature.