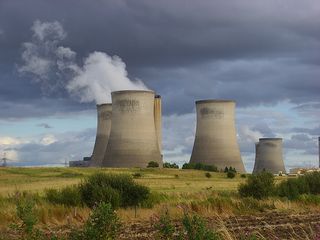 TOKYO — One must accept a risk of radiation exposure when flying in and out of Narita International Airport, the busiest airport in Japan, just east of Tokyo, but perhaps not for the reason you are thinking.

Fukushima Daiichi, the tsunami-damaged nuclear reactor site about 150 miles (241 kilometers) to the north, as the foolish crow flies, continues to leak trace amounts of radiation. Radioactive iodine-131 made it into the water supply here last month. But most, as physics would have it, has since decayed into stable xenon.

So, few in this Tokyo region have been exposed to radiation levels as high as someone just hopping off a plane. The international flyer receives a dose of about 0.10 millisievert, or the amount of ionizing radiation in two dental X-rays, from the sun's radioactive cosmic rays. That means that folks who left Tokyo because of the threat at Fukushima likely received more radiation on the airplane flight than they would have if they had stayed at home. [Mysterious Radiation May Strike Airline Passengers]

Such is the irony of nuclear energy, so potentially dangerous yet so much remarkably safer than most other energy sources, namely coal and other fossil fuels.

As bad as Japan's nuclear emergency could have gotten, it would never be as bad as burning coal. Coal is fantastically dangerous, responsible for far more than 1 million deaths per year, according to the World Health Organization.

Start with the coal miners, thousands of whom die from mine collapses and thousands more from various lung diseases. Next, add the hundreds of thousands of deaths in the public from breathing coal's gaseous and particulate pollution, mostly from respiratory and heart disease.

Next, add the untold deaths and disabilities resulting from mercury in coal entering into the food chain. Then add the millions of acres of land, river and lake destroyed by mining waste.

Some of China's citizens worried about a radioactive wind blowing over from Japan, but coal-burning power plants from China are causing far more health problems for both China and Japan.

Coal even releases more radioactive material than nuclear energy — 100 times more per the same amount of energy produced, according to Dana Christensen of the U.S. Department of Energy (DOE), as reported in Scientific American in 2007.

According to WHO statistics, there are at least 4,025 deaths from coal for every single death from nuclear power. Switch to "clean" natural gas? That's still 100 times deadlier than nuclear energy. Oil is 900 times deadlier.

Not many are expected to die from the Fukushima Daiichi accident.

The U.S. DOE predicts a yearly dose of about 2,000 millirems for some people living northwest of the nuclear facility within 19 miles (31 kilometers), which could slightly increase their cancer risk if they haven't left the area. But Japanese health authorities were quick to warn the public not to eat certain local foods with harmful levels of radioactivity, namely milk and spinach; people living within 12 miles (19 km) of the nuclear facility have been evacuated as a precaution; more are expected to be evacuated; and radiation levels continue to fall daily.

In fact, all energy sources are harmful when factoring in a human population of about 7 billion. Wind turbines are noisy and chop up birds and bats, after all. The true environmental mantra always has been to consume less, to be more energy-efficient.

One would think that Japan has learned this lesson. But aside from the rolling blackouts in Tokyo — done for supply-and-demand reasons, not conservation — nothing seems to be cutting back on the vast energy consumption that enables the glow from thousands of pachinko parlors to obfuscate every star from the night sky above this fair city.

The Japanese do have one perspective straight: While international news coverage remains focused on the day-to-day trials at Fukushima Daiichi, most of the local news here concerns the approximately 300,000 displaced survivors of the March 11 earthquake and tsunami, and the death toll that might exceed 25,000.

The site of rotting human bodies, as well as fish, cattle, dogs and cats amongst unspeakable destruction, is a profound reminder that natural catastrophes, in but a few minutes, can dwarf any catastrophe that foolish humans can produce. [In Photos: Rescued Pets in Japan]

(Note to reader: I couldn't bring any potassium iodine to Japan even if I wanted, because the west coast of America has stockpiled the entire commercial supply, god love 'em, ensuring that anyone who would need it wouldn't get it.)