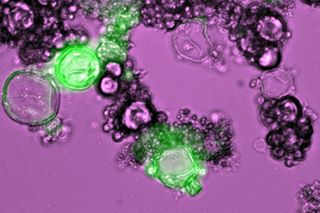 An image showing the green fluorescent protein inside of a a mouse.
(Image: © Avi Schroeder)

(ISNS) -- Researchers have developed a new type of nanoparticle that is capable of synthesizing proteins on demand. The effort marks a first step toward inventing a new method of attacking cancer cells in humans.

The Massachusetts Institute of Technology team has shown that a beam of ultraviolet light can trigger protein production in nanoparticles located in the bodies of laboratory mice.

Introduced into the bodies of cancer patients, the nanoparticles would target tumors. Once there, ultraviolet light beamed at the nanoparticles’ location from outside the body would start the synthesis of protein drugs that would kill the cancer cells.

If it works in human patients, the method should have particular value in attacking metastatic tumors, created by the spread of cancer from its original site to other parts of the body. These cause 90 percent of cancer deaths in humans.

The researchers emphasize that the approach will require several fresh advances before doctors can use it on cancer patients. But their experiment on mice, reported in the journal Nano Letters, has shown the concept's feasibility.

"This is the first time such a remote-control artificial process has been demonstrated in a living organism," said principal investigator Avi Schroeder. "It is a first step but we are extremely excited by it."

Schroeder is a chemical engineer at the Israel Institute of Technology in Haifa. Schroeder led the research team while working at MIT's David H. Koch Institute for Integrative Cancer Research. His collaborators included Michael Goldberg, Christian Kastrup, and Christopher Levins.

"It is a really terrific and innovative concept, and it certainly gets one's imagination going," said James Heath, a chemistry professor at the California Institute of Technology who was not involved in the project.

The method involves assembling the raw materials for making a specific protein in a miniature factory and then building a nanoparticle around them. The entire assembly is about one thousand times smaller than the diameter of a human hair.

"You start with the right concentration of all components and then do the construction of the nanoparticle containing them," Schroeder said. "It's like building walls around large pieces of machinery in factories."

The "walls" consist of structural molecules called lipids, which exist in all living organisms. Inside the walls, each mini-factory contains ribosomes, amino acids, and enzymes, along with short sequences of the DNA corresponding to the desired protein. Another key chemical provides the trigger for protein production. Usually it acts as a cage that holds the DNA in check. But light causes the cage to open up and release the DNA.

"It is sensitive to light with certain wavelengths. Thereby once the nanoparticles are exposed to this light the wrench is removed and the protein production process can be initiated," Schroeder said.

Then the team injected a suspension containing the particles into the abdomens of laboratory mice. After they shone ultraviolet light on the mice, they detected the colors characteristic of the two proteins, showing that the light had successfully stimulated the nanoparticles to produce the proteins.

Why did they inject into the abdomens?

"We wanted to show that the process is feasible in a site where metastatic cancer resides in many patients," Schroeder said. "We also wanted a region in the body that would not have a lot of trafficking to other tissues; this gave us a better experimental control and a higher level of understanding of the process."

Having proved the concept, the team is now extending it in the direction of possible use in humans.

"We are advancing it towards the production of multiple drugs in the nanoparticles and are aiming for additional triggers to initiate the production process," Schroeder said.

As they seek to develop human application of the technology, the team is aware of the need to avoid unintended consequences, such as destroying healthy cells as well as cancerous ones.

"Side effects are always a concern," Schroeder said. "[Our technique] should be safer than the alternative—dosing the entire body with a pre-synthesized drug that can damage healthy tissue."

The mouse experiment presents a key step away from that alternative. "Our path towards the local production of drugs in humans may be several years away," Schroeder said. "However, it's getting closer."

A former science editor of Newsweek, Peter Gwynne is a freelance science writer based on Cape Cod, Massachusetts.